A Sense of Direction

In 2019 during our 1st season on the Xeruini River Preserve and Rio Novo, we had discovered a new plan to find even more un-fished water in the area. During a couple of flights with our drone, to capture the camp, the white sand beaches and the countryside for an upcoming video, we found a huge lake that was not connected to the river anymore. Thousands of years of high and low water seasons tend to eventually carve out new river bottoms and leave landlocked lagoons in its path. Some of these are evident and easy to find from the river using high water creek channels as a point of reference. Some however show no signs of existence from the river and are impossible to find on foot. Wandering through the jungle on an attempt to find water will only get you lost and can be very dangerous to try. Even for the locals. These hidden cutoff lakes and lagoons are usually reconnected to the main river channel during extreme high water years and it is common for fish that are now able to swim through the flooded jungle during this time to end up trapped here when the water recedes. Sometimes for years or even lifetimes.

So the next day we headed out to see what we had found. A short boat ride from camp and a 200 meter walk through the jungle revealed an amazing site. A large lake that appeared to have the depth to hold fish and the splashing on the other end would be enough to confirm. So we headed back to camp and got a boat and pushed into the lake to be used by the fisherman in the camp that week. The story of the amazing, topwater, fishing experience the next day sewed up the plan to put out a daily search party for similar lagoons and lakes up and down the river. 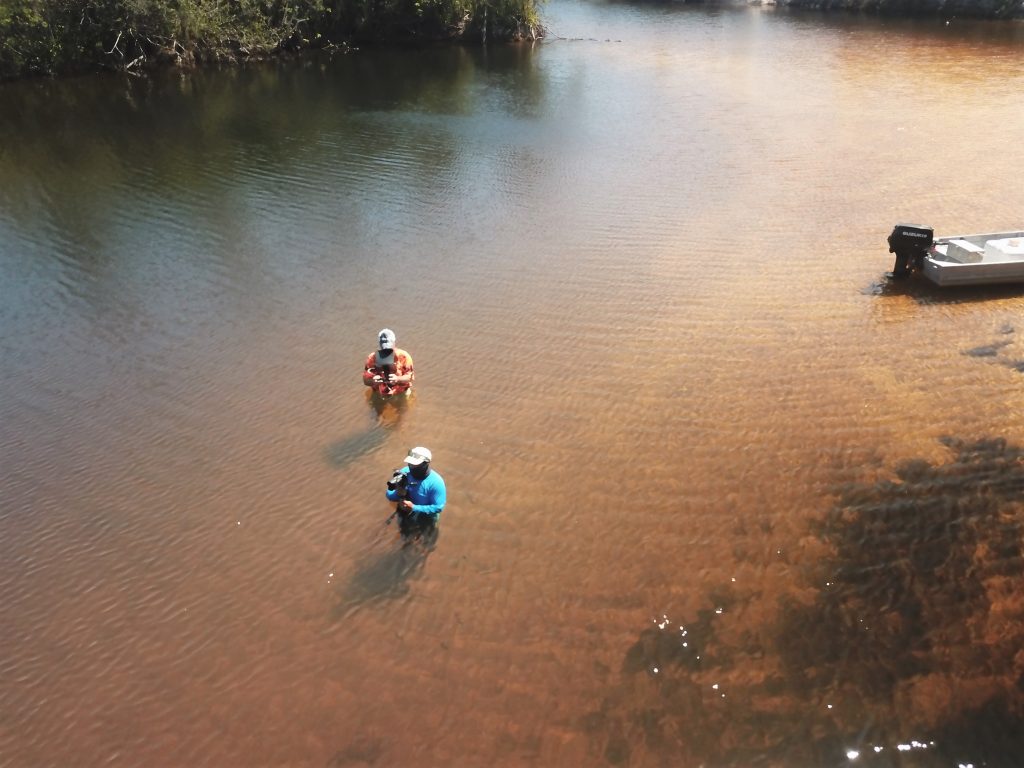 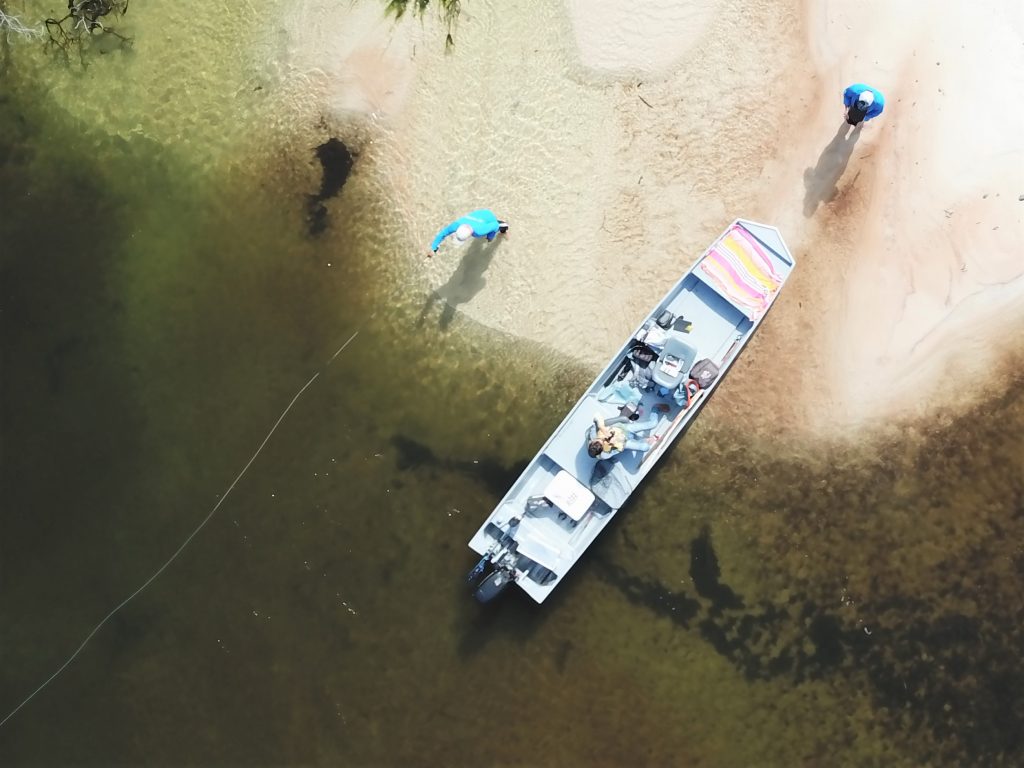 So the next morning, now with a better plan, Myself, Pelado and Karim set out for a part of the river with a lot of twists and turns. A place Pelado and Doca discussed as a possible place for more of these lagoons. The plan was to beach the boat and send up the drone and basically take a look around. Morning turned out to be the best time for the elevated wind channels and the light conditions. That day we found 9 lagoons and managed to get to 6 of them and out of those 6, 4 for sure had fish in them and were large enough to fish. The plan had some challenges. There were no paths to get to these lakes because they had never even been seen before. The thickness of the jungle surrounding them was sometimes a problem. Also once we got there finding a place with enough room to “test the waters” from shore was a challenge for some of them. So we ended up having to use a baitcasting reel and some top water lures to check them out. I must say that was fun as hell. Watching a Peacock Bass that had never seen an artificial lure before, blow up on a topwater bait was an adrenaline jolt to the system.

We mapped, flew the drone, hiked in the jungle, fished for pretty much all day that day. The next morning we once again pushed a couple boats into a lagoon and sent our anglers into the unknown waters. This was so much fun and the reality of what we were doing was getting us more excited with every flight of the drone.

Later that morning we found a very large lagoon a bit further from the river. This one was almost twice as far from the river bank than most of the rest. But it looked awesome. So we sent the search party in. We walked and walked and occasionally marked a tree or two with the machete like leaving some bread crumbs to find our way back. The jungle there was thick and had a few old creek bottoms that were marshy and the landscape was different it seemed with every step. Maybe 45 minutes went by and we had still not found this huge lake. Pelado starts to get a little frustrated and finally we stop and discuss a new plan to go back to the boat and fly the drone again to see what we had done wrong.

Well… here is where the problems began. As we started back to the boat, the return journey started to look nothing like the way in. The marks left on the trees were missing and it did not take long to realize we were going the wrong way. Since we never found the lake we also had no starting point to return to. So we wandered… and wandered…and wandered… and over the next 30 minutes, which does not seem like a long time until you are wandering around the Amazon Jungle. We basically had no plan now. The sun was straight up and there were no landmarks. The fear on Pelados face was obvious.

I have been hunting and fishing in the United States all my life. I have traveled up Western Mountains, through Virginia swamps and boated through mazes of California Delta waters. I must say I have a pretty good sense of direction. This entire time we were doing the wandering I felt like for some reason we had been kinda veering right. I just had this weird feeling like we needed to go way more left. The sense grew to a point when I finally said to now worried Pelado, hey we need to go this way. Pelado would have none of it. Instead he got more nervous and started shouting at the top of his lungs – “Karim…Karim…Karim…” over and over. Now the sense of fear was intense. It was the middle of the day, the sun was so hot and we had no water. So I insisted we start looking left more and I basically started walking in the direction my senses were telling me to go.

“Karim…Karim…echoed through the countryside. We walked for a little while longer and I could start to hear a funny noise from a far. Very faint but it was there. I motioned to Pelado to hush and listen. A minute later I made the decision that it was the drone in the air making this noise. Pelado could not hear it. Maybe because of the constant chainsaw noise rattling his ear drums for four years earlier in life. I was confident. Now I could hear it better and put a direction to it. To the left as I expected. We started to walk faster and the sound was getting louder and louder. Relief is not a strong enough word to express the change in the facial expressions I could see on Pelados face. But I kept thinking, What if Karim is flying the drone over the jungle in the wrong direction??? This I kept to myself and I am sure it never entered the mind of my friend Pelado. Finally we found the river upstream of our boat by about 300 meters. We ran for the river and leaped in to cool off and we swam to the boat. Wow… I felt alive like I never have. 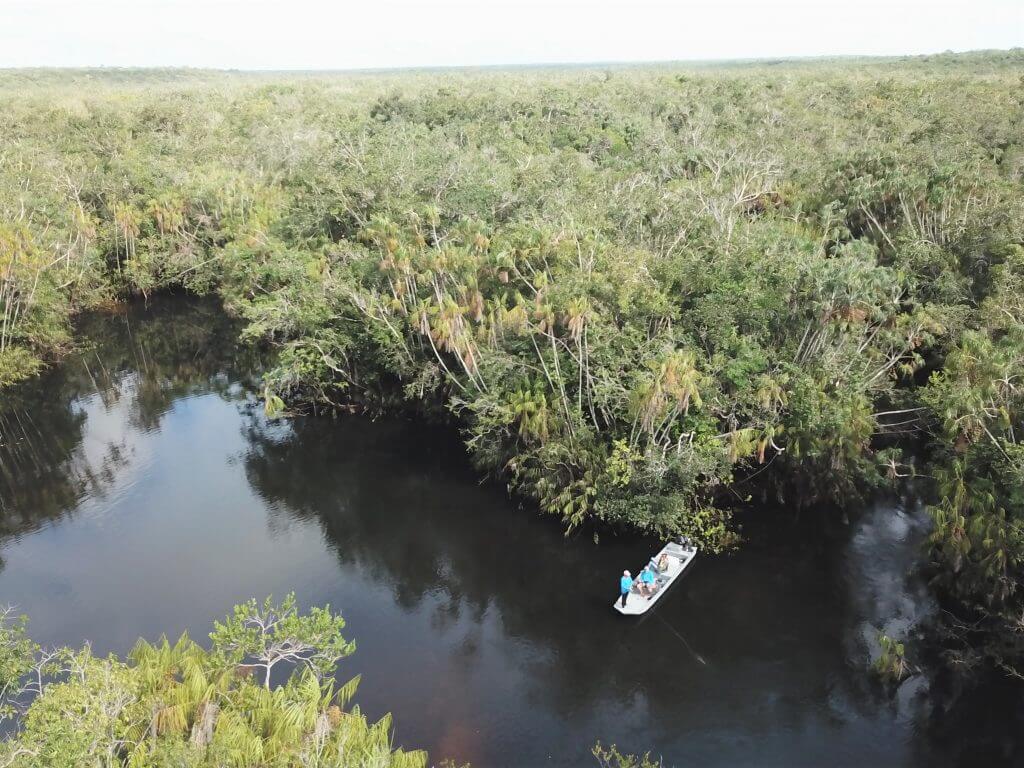 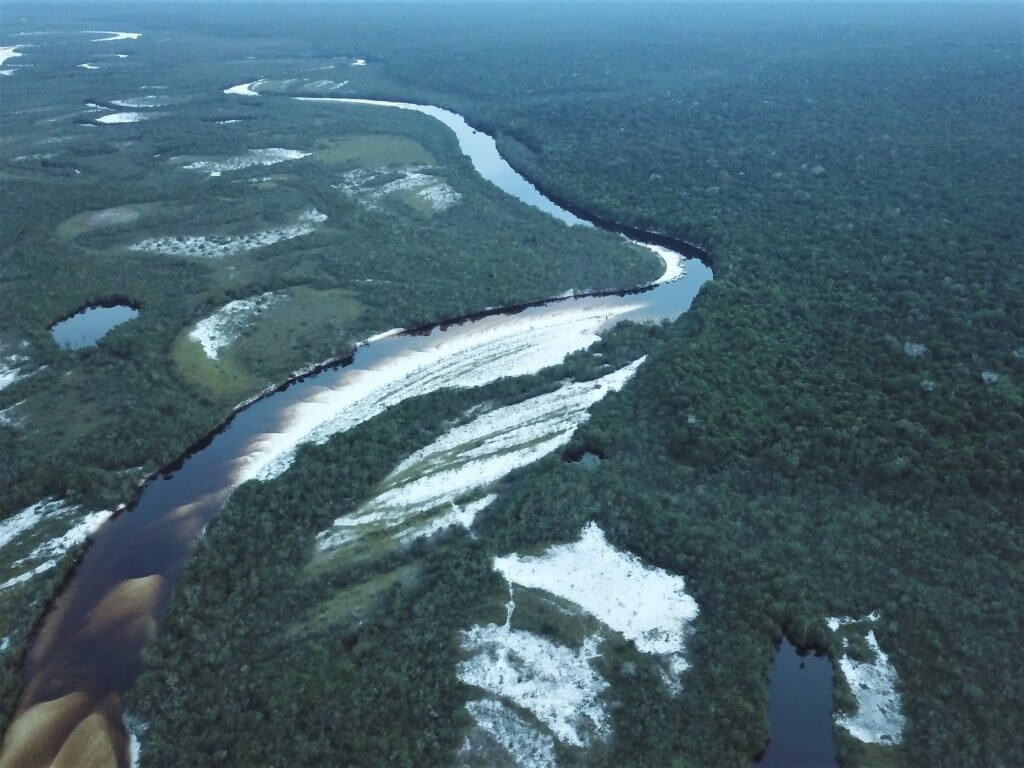 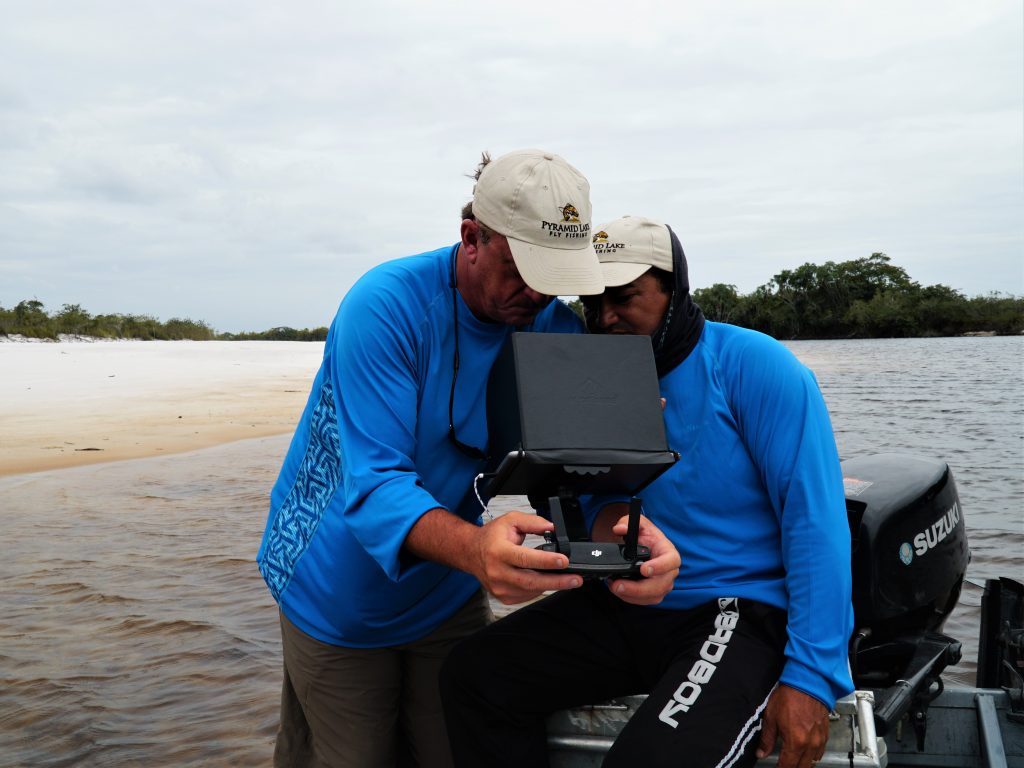 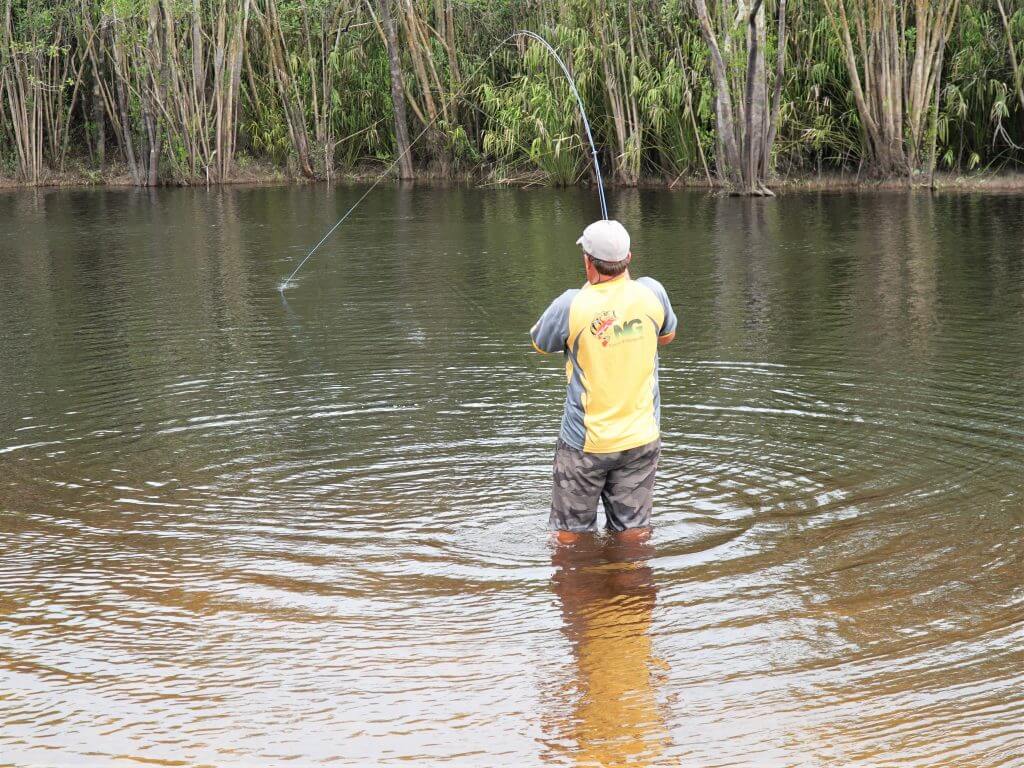 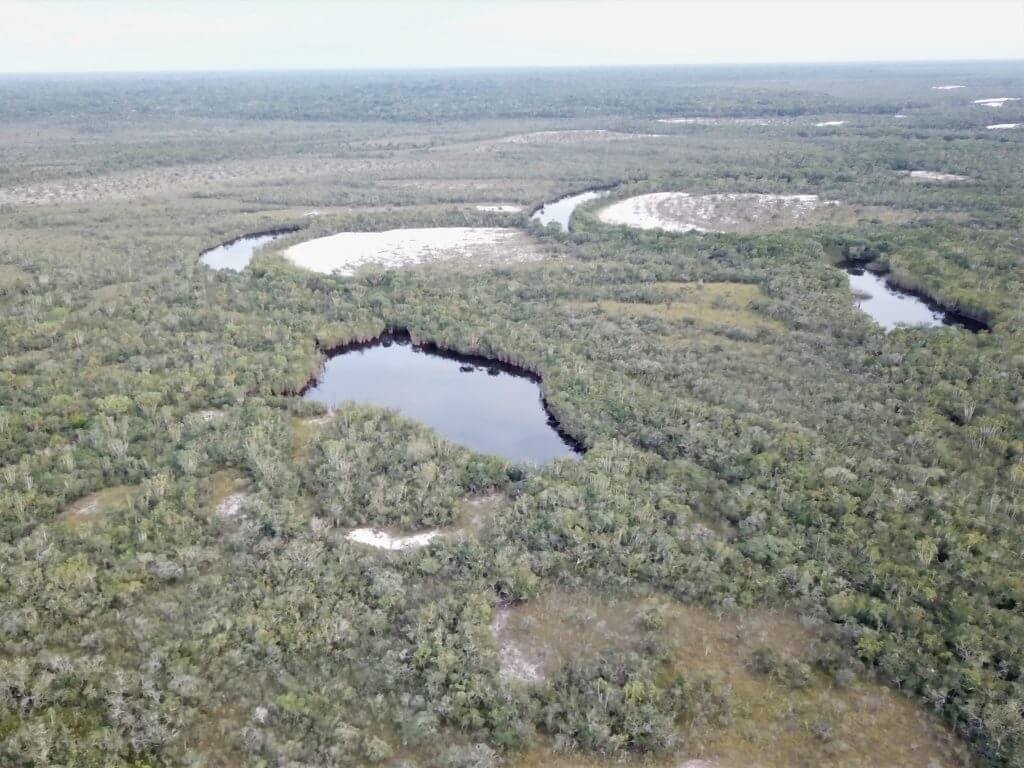 When I see someone comment or post somewhere on social media about all these new devices we have in our lives like cell phones, cameras, smart watches, laptops etc…  Well all those stories are true that you hear about the government using these devices to monitor your lives. I am here to tell you though, it is not all bad. Turns out the Russians have been watching and following me and they even sent a drone to the amazon jungle to make sure I did not get away… My first thought is why didn’t we have a compass with us, or something. I just figured a man raised in the jungle in the logging and fishing business was all I needed. Ha. This is usually true unless your guide’s left leg is longer than his right leg from a bicycle accident he had as a kid and when he walks any distance he tends to seem to always veer right. It makes for some awesome hazing of our camp manager when the conversation turns to exploring the jungle.

Needless to say we improved our wandering skills and the project continues to be a part of our plan to seek out hundreds of totally un-fished areas of the Xeruini River Preserve, Rio Novo and our other destinations as well. These areas will be an addition to our already ultra exclusive waters and ensure that we have enough places to fish to leave entire lakes and sections of river un-fished for several years at a time. In the off season after 2019 we built from scratch in our shipyard, several boats made of lightweight materials designed to be much easier to get through the jungle and into these landlocked lakes for our guests to use. These boats are one of a kind and allow us to get even further into the never before fished reaches of the Amazon. Another example of our team thinking outside the box and delivering an experience to our guests that make this fishing trip one for the Bucket List.