My name is Allan, I was born and raised in a small town in the suburbs of São Paulo called Lençóis Paulista. I spent my whole childhood living on a farm. I’ve learned to have more contact with nature than anywhere else. The school I studied was a little far from home and it was one of the few moments I went to the city. I spent most of my time playing and doing my activities alone, when I wasn’t learning anything new from my grandparents. They were very important to my growth at this stage. I was interested in fishing watching my grandfather do it. He and my dad were all going to a different place every weekend. It took them a while to get me with them, I was still young for that, they said.

With a lot of insistence I started to accompany my family in the fishing and I learned to like it even more.

Not all my friends back then liked to fish. During the week I studied and went to play football with them, but I couldn’t wait to get saturday to go fishing with my father and grandfather.

What I could learn about fishing would be listening to stories, reading some magazines, or watching the only TV show that aired on Sunday mornings. My friends found it funny when I said I woke up early to watch a fishing show on TV, especially being on a Sunday (laughs)

My dream was to be able to do what I was watching, travel to amazing places and fish all the fish I wanted. Living off that seemed a long way off, I had no idea how anyone could work just fishing like that. 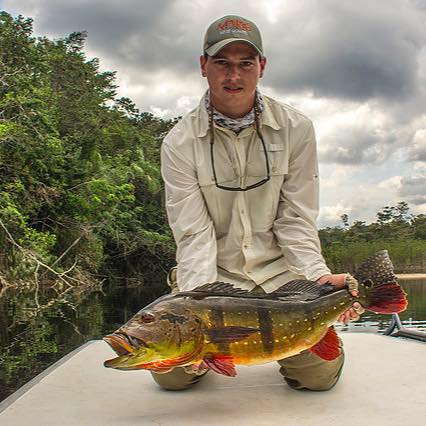 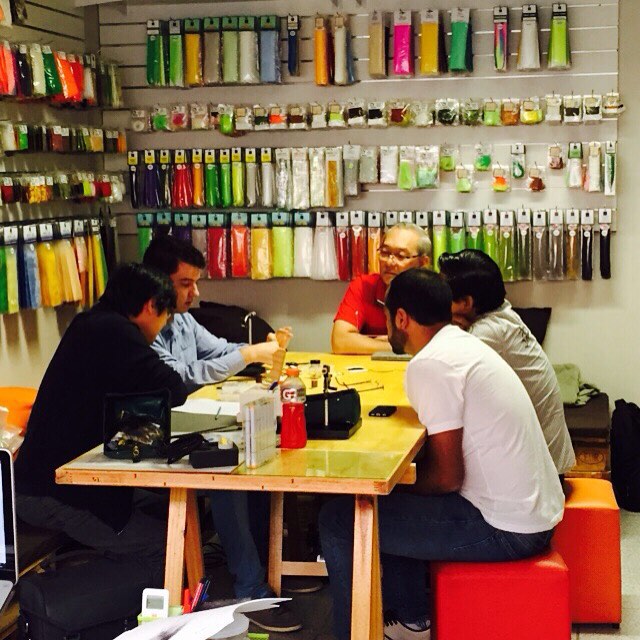 I didn’t take this idea too seriously and i’ve distanced myself a little bit from that subject. My family had moved to the city and I lost all contact with nature that I had before. As a teenager I focused on studying to have a good education and fishing was having less space in my life. My whole routine studying ended up being tiring too and little interested me, until one day I ended up knowing Fly Fishing. I personally saw a fisherman wearing this equipment and what he was doing caught my attention. The movement with the stick, all that colored line in the air, that was unlike anything I’d seen before.

With more opportunities for information I went to research about this modality. I found out a multitude of things I didn’t even expect. For a Brazilian teenager that was still a long way from my reality. Little was said about Fly Fishing in Brazil, the materials were expensive and difficult to find. It discouraged me a little at first.

A few months passed and I ended up finding by coincidence a set of Fly in a store in my city. I decided to ask my parents to give me this equipment. They sure didn’t want to spend money on it. They thought I wouldn’t know how to use it or that I’d lose interest soon, like it’s a toy a kid gets and then it’s stored in a box.

I decided to show them that I was committed to learning. I studied a lot, reading books and watching everything that could be about Fly Fishing. When I finally won my first set, I could barely sleep at night waiting for the opportunity to fish for the first time with it.

If you think I’ve managed to fish, you’re wrong (laughs). Nothing I’ve had been watching for weeks made sense in practice. I was very sad and disappointed. I couldn’t tell my parents I wanted to give up because they were going to “kill” me afterwards (laughs).

I didn’t give up. It took me months to make a good pitch and so catch my first fish, a Black Bass. After that I was sure this was the kind of fishing I wanted to do.

From studying so much, my grades gave me some early vacations and so go fishing more and more.

When my classes were over I had to choose which course I was going to study in college and which profession to pursue. It was at this time that I had a defining moment in my life. A serious illness affected me and changed all the plans I had made. I had Guillain Barré syndrome. I lost most of my body movements and spent months recovering doing nothing. Those were the worst times I’ve ever had. I didn’t know if I was going to be able to do it all over again, I couldn’t go on with my studies to get into college, etc. 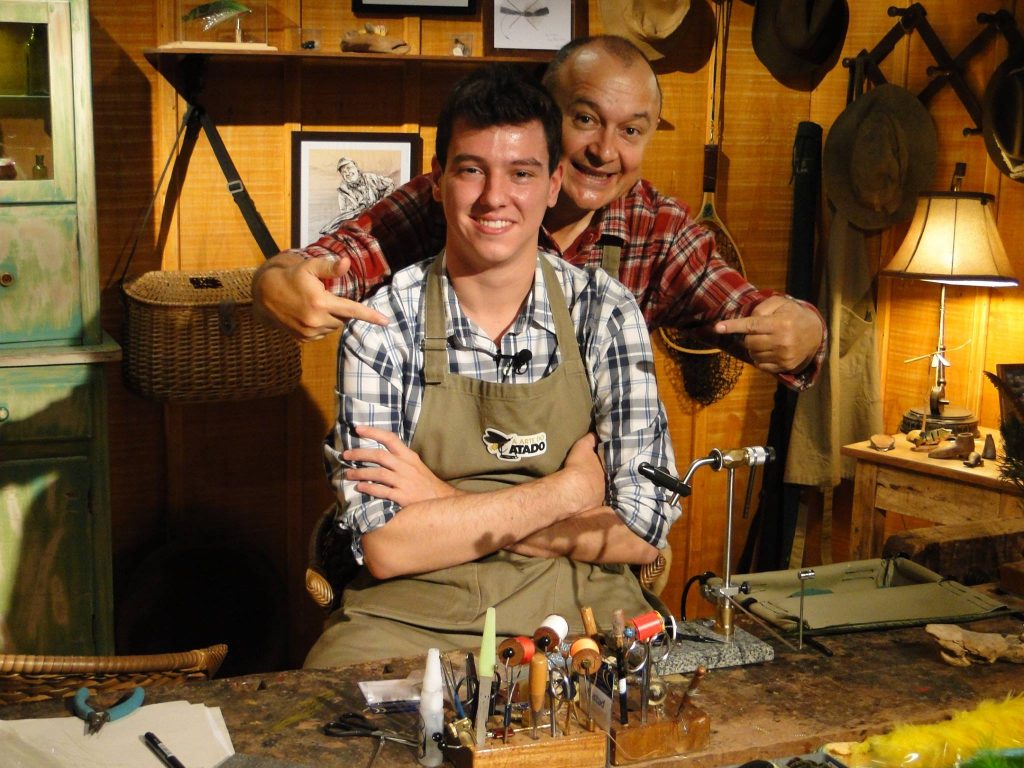 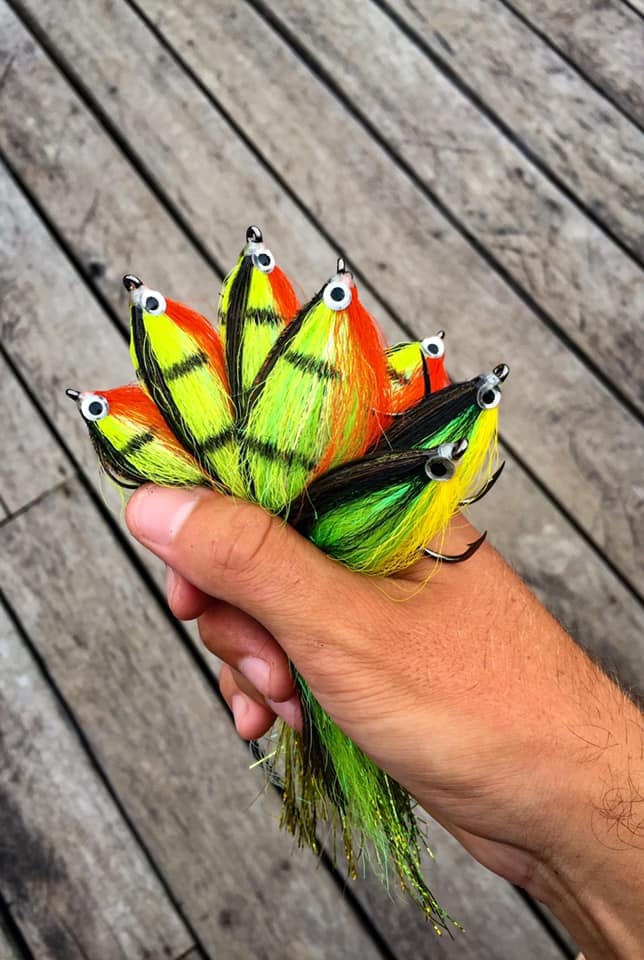 When I was recovering at home, I spent part of my time trying to find a solution to my professional career. I thought of many things I could do, one of which came from living in the kitchen with my mother and grandmother. I liked to see them cooking and wanted to learn more about it. I decided to start studying at a university of Gastronomy. At that time, in my free moments at home, I became interested in the bait ting because it was something still little widespread in Brazil. I was buying some materials with the idea of making my own baits for future fisheries. These fisheries didn’t always happen and I accumulated a lot without use. I had the idea of starting to sell some bait to friends. This was taking a higher proportion than I expected. I went deeper into the t-tied and perfected myself. An opportunity to record some TV shows came up. With a little of the prominence I gained, I increased my sales and wanted to expand this business. In the same year I still had the chance to get a job as a fishing guide in the Amazon. Everything I once thought impossible to happen was now in front of me.

I realized I could work like this. My idea of being a Chef became just a willingness to cook for friends or customers when I was driving. The fishing and the t-tying of flies proved to be much larger than I imagined. Currently these are my professional activities and much of what I do in life.