The Golden Dorado River Story – as told by Luciano Alba

“Where no one else can get”

After the first few seasons at Estancia Laguna Verde, as the bookings were increasing, the staff and guide team started to grow to match the new business. Through the recommendation of a friend, we hired a very experienced guide, Dario Arrieta, born and raised near the Parana River and vast experience of northern patagonia, working for a couple very well known outfitters (Bariloche area).

Dario, while working at Estancia Laguna Verde would always talk about starting a fishing program for Golden Dorado.

We had always been a big dorado fan and in the past and even checked a couple places for a lodge in the north east of Argentina targeting this amazing gamefish, but we were never been impressed with what we had seen, being aware of the many issues related to fishing for dorado, such as water levels, and so on.

One year, as we were talking with Dario in the off season over the phone about dorado, we told him that we were totally interested in that, but we needed a new concept, a game changer idea. Something different, something unique and special that gave us more chances to adapt to the characteristics of the Paraná river and dorado fishing.

Dario went to guide in Bolivia, when he returned he gave me a call, and told me: “Lucho, remember this idea you talked about, well, I think I got something interesting; what about a floating program as they do in the Amazon for peacock bass, with floating houses”. 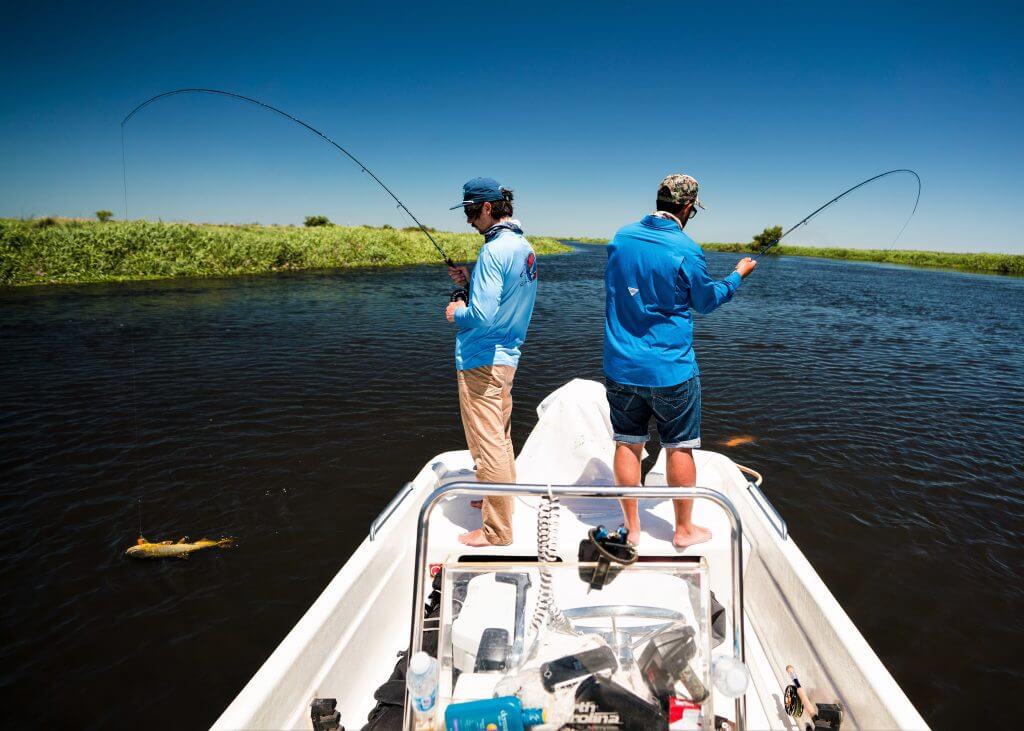 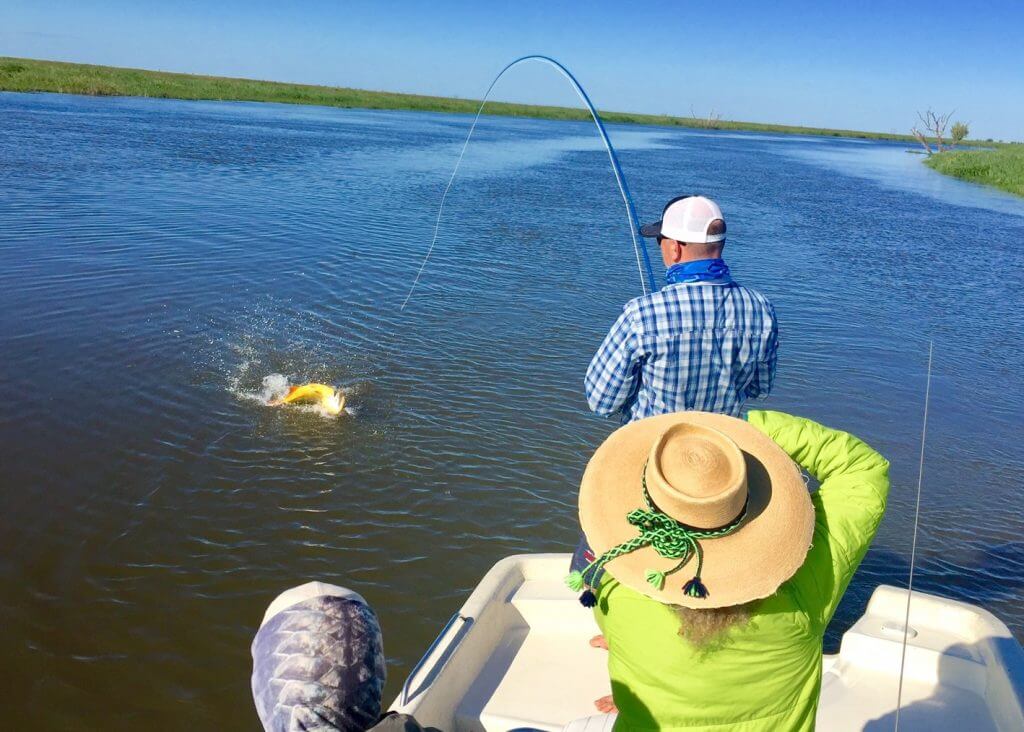 So we got our minds working, brainstorming about it, and excitement grew rapidly. We shared the idea with my father which he loved totally, and as he shared with our partners at Estancia Laguna Verde, everybody was on a new journey.

We finally found a really nice catamaran named the Parana Gipsy, which had worked in the past as an “eco tourism” cruiser. It was built by one of the earliest outfitters in the fishing and hunting business in Argentina, David Denies.

The catamaran was well built and had many classy details, with a good structure, but was not well maintained. Once David Denies sold it, it was basically used as a floating house at the Classy Tigre, near Buenos Aires.

After some negotiating, we were able to get the deal finalized. We thought we were now entering the easier part of putting the Paraná Gipsy back in shape and adapting it to the needs of a fishing boat, staff, professional kitchen, etc.

Two of our partners and close friends, the Segura brothers, are architects and the younger of the two, Eduardo, is a very experienced sailor with vast knowledge on the field and a close friend of a great naval engineer, as well as multiple people in this business.

In our case, having a good experience in the apartment building construction field, we thought we were more than ready for this task. Oh boy, how wrong we were!

This has been one of the hardest things we have ever encountered. We were all pretty much living at the dry dock facility where we had the Gipsy out of the water to do all the work needed. We had researched on which was the best place to do this job and our due diligence was way off!

Every week there was a new negotiation with the owners of this place over the ever changing conditions, prices, work.

It was like that for about a year. Not fun!

We ended up hiring our own team and paying these guys to stay there, sort of a “dry dock boat hotel”.

Still that wasn’t enough and every time we had something new to do, there would be another negotiation and hassling.

We were afraid we would never get out of that place! 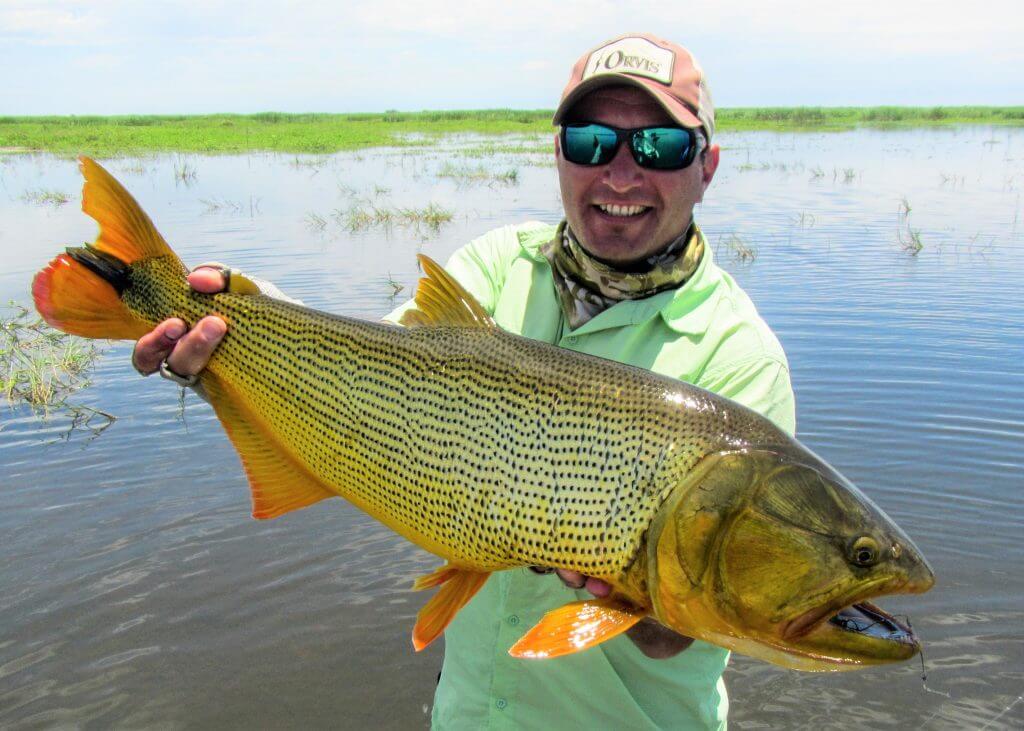 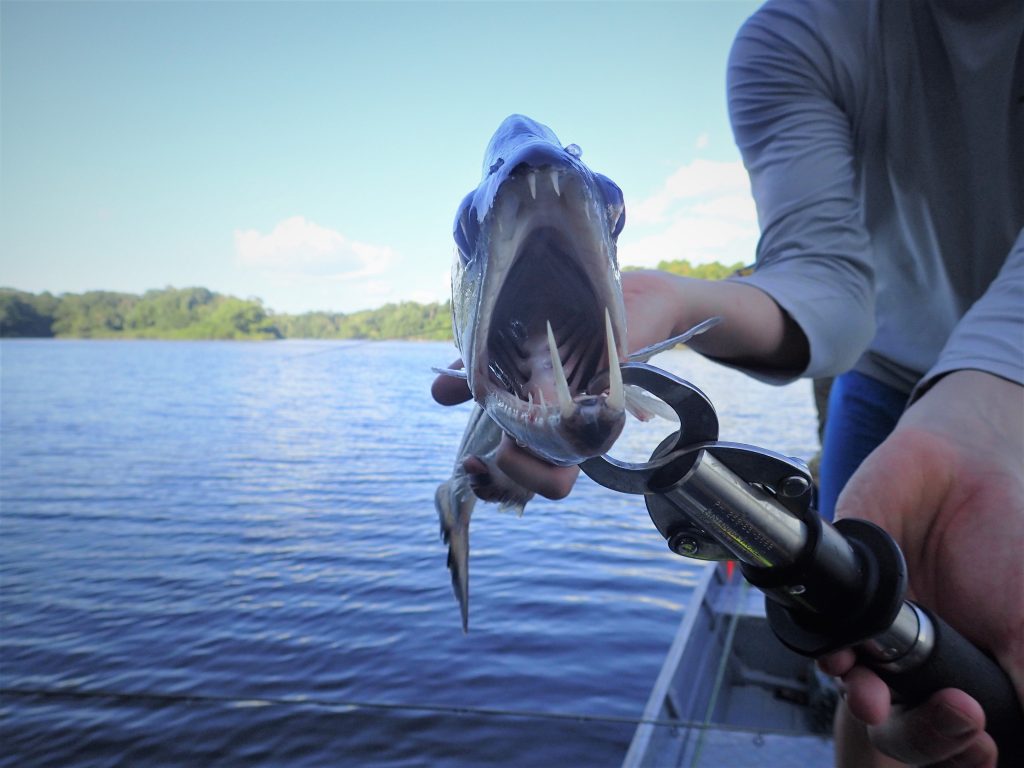 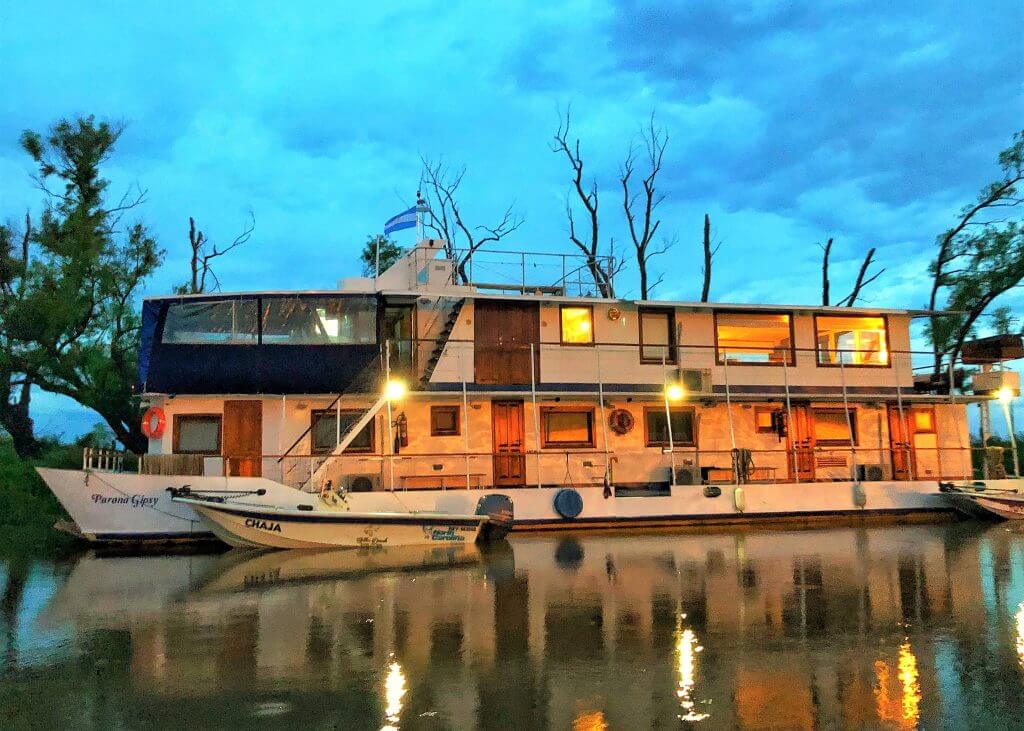 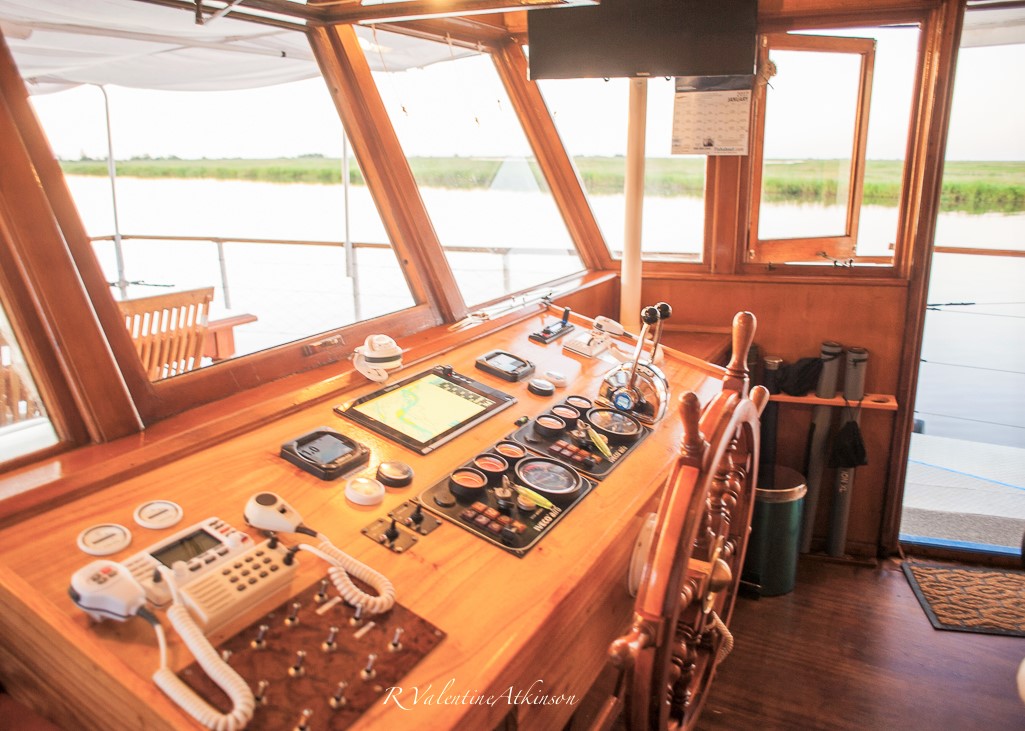 The Golden Dorado River Cruiser program was on!

If Estancia Laguna Verde was a life changing moment, for sure this was a second step to it. Taking apart all the hassle and unpleasant moments to get this ready to go, it has brought so many great moments. It has made us realize how much we love doing this and putting golden dorado fishing to a very close second to trout fishing. Born and raised trout fisherman, trout fishing will always be the first love, but golden dorado keep growing as a very very close second. A gap that becomes smaller and smaller the more I fish and learn about dorado.

Their harsh beauty, mixed with serial killer behaviour, extremely passive aggressive, moody, cyclothymic, to name a few adjectives, makes them an amazing gamefish. One that every angler should at least once in their life fish for! Not to mention the other really cool species that populate the Paraná river.

The Paraná Gipsy went from a 3 bedroom, two decks,  one staff room boat, to a 5 bedroom (all with ensuite bathrooms) for guests, plus room to have all the staff needed of 5 guides, captain, chef, waiter and all around man, and waitress/maid on board, with 3 decks. We also improved many other things, specifically adapted for fishing, where you are able to access it from both sides and the back with the skiffs comfortably. We built a professional kitchen, refinished all the beautiful details in the wood and added very good storage capacity for the many things needed to run a full week of fishing.

Thinking back in time, it is impossible not to realize how cool it has been and how much we enjoy this program. Waking up with the sound of the engines starting, hearing things get in motion and as you go up for breakfast, the boat starts to move, cruising up or down river, along the amazing upper delta of the Paraná river, home of hundreds of birds and wildlife. As you are sitting on deck while checking out the river you are able to witness all sorts of nature spectacles. Dorado smashing sábalo. Wolf fish on the shallows smashing baitfish. Migrations of sabalo and boga. Pira Pita feeding on top right below the Cruiser. Birds diving hard on the water to pick up a fish. And so on.

As the fishing day ends, that final ride back to the boat, at last light, and as you approach, an asado (lamb) in the makings with a cold beer waiting, it is hard to beat.

Which makes you wonder if is it the fish we are after, or it is that whole adventure, that  whole package of people you share with, your fishing partner, the late night post dinner talks and drinks, the cultural immersion, the life stories you hear, and so on, that makes a fishing trip so special.

They say that in travel as in life, it is not the destination but the journey and hopefully there will be other new ventures to dive into, going at them with the same passion as the first day. 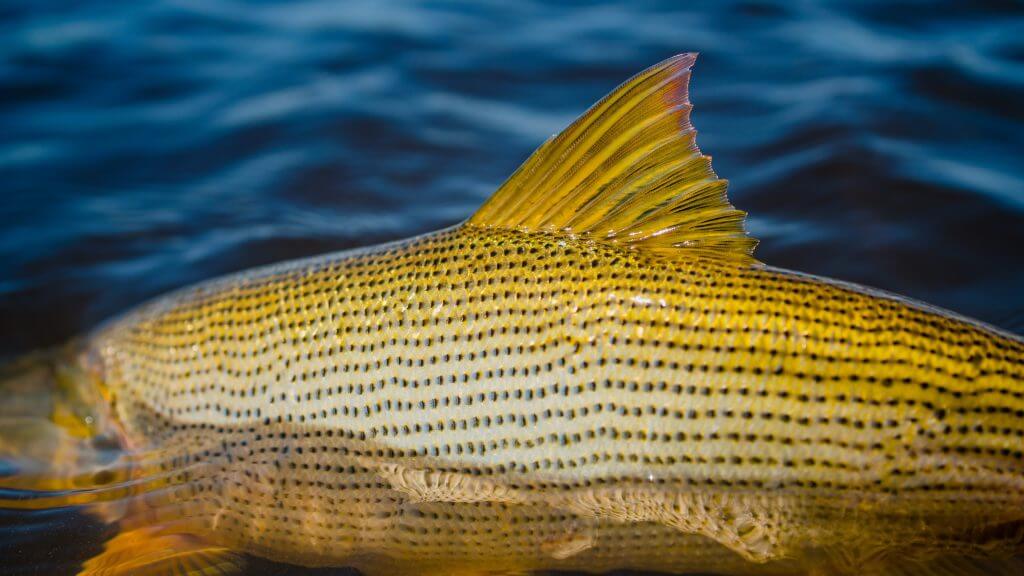 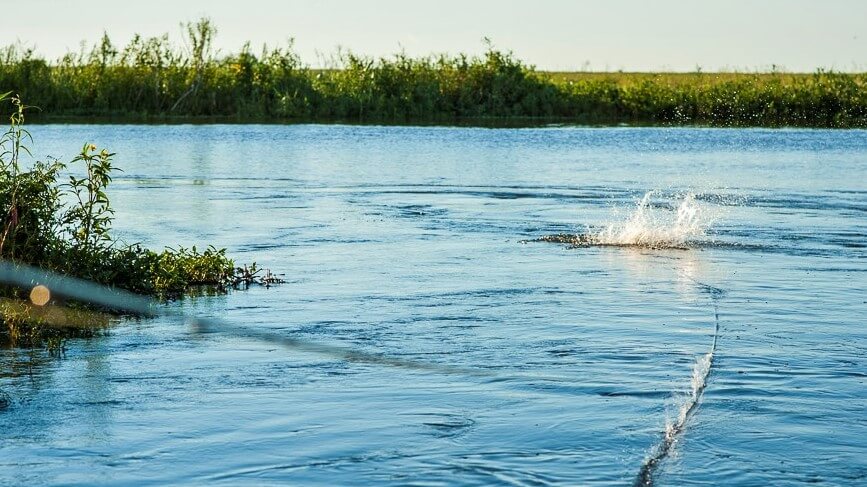