The region of South America called the Amazon is huge. It is roughly 2/3 the size of the entire United States. So when you look closely at the small remote villages that are scattered around it, you can see the remoteness and just how isolated a small village of 30 families on a tiny tributary really is. Imaging growing up in this area and spending 99% of your life only seeing your family and your friends living around you. The outside world probably looks very strange and far away. When we visit the people of these areas it is easy to take for granted coming and going so freely and the impact we have had on these people’s lives by simply being there.

You can imagine how a brave Amazonian man that spends days in the jungle alone, hunting and fishing and commonly runs into wild animals, can be really people shy. Especially outsiders.  So imagine getting a knock on the door in the middle of the night by your friend and asked to spend the week taking a couple of gringo’s fishing on your river where you live. To carry out the duties of a fishing guide before you really even know what one is or does. Would you be scared?

For one of our fishing guides on our Amazon operation this is how it all began. Meet Charlie Vasconcelos, a local in the village of Terra Preta on the Xeruini River. Charlie is a younger brother of Doca, one of our top guides. They have a typical family with quite a few kids. They plant, harvest and make farinha. It took the two brothers a few minutes to count all the siblings, 6 boys and 5 girls. Charlie liked to follow his grandfather on hunting outings and learned shooting as early as he learned sneaking out of school to fish with Doca. They are the closest brothers in the family. Together, the two figured they could catch peacock bass and arowana with a piece of red cloth. And that you can find tons of fish right behind Chandoca beach across the river from the village. Harvesting nuts in the groves of Brazil Nut Trees on the Upper Xeruini is his favorite adventure since both boys were strong enough to carry a bag with 60 kg of precious castanhas (Brazil Nuts). They did sink their father’s boat once and did their best to save it before getting hit by something heavier than a flip-flop. With no doubt both enjoy living in Terra Preta and wouldn’t trade it for anything. 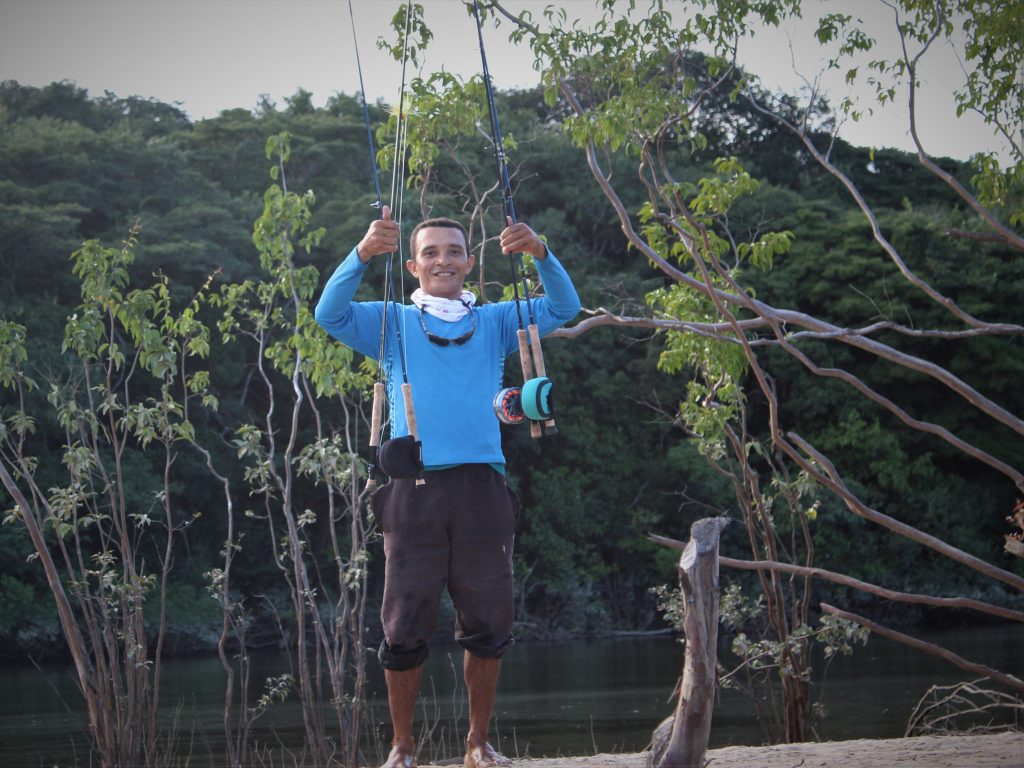 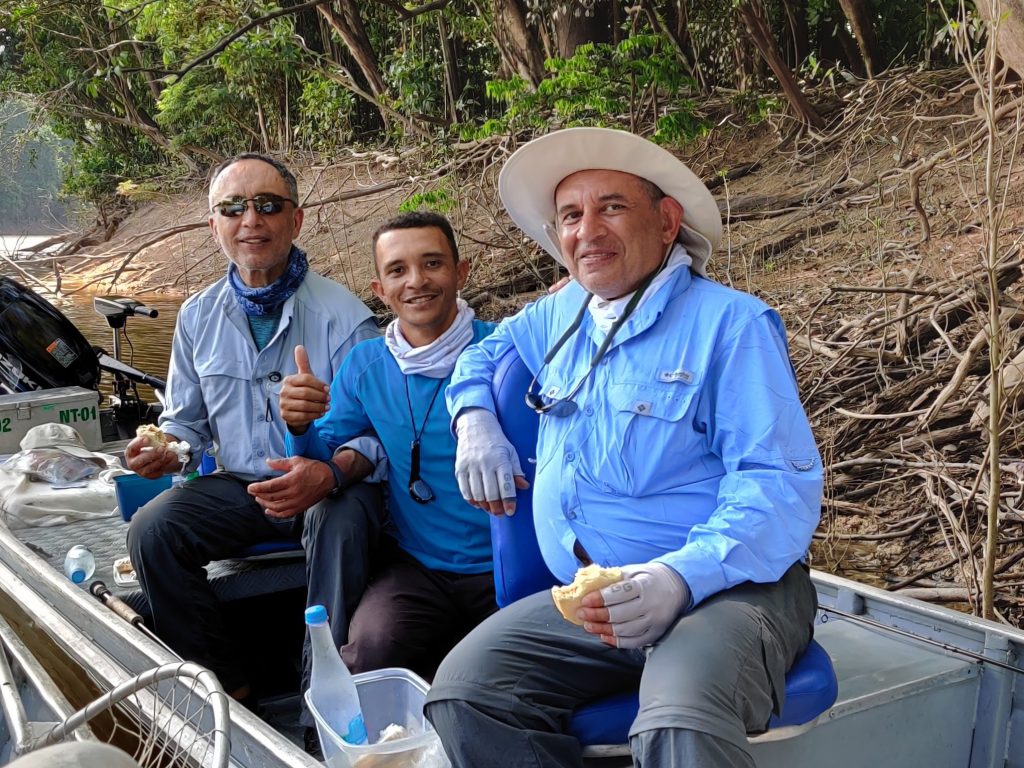 When the first attempts of fishing operations started in the region, some of Terra Preta dwellers were invited to work as guides. Most of the folks from Xeruini river are really good at fishing, but dealing with tourists is a whole new world. Some, like Neto, Pedro and Doca embraced the opportunity. Others preferred to go back to their village lives. Charlie is a little guy, but he’s strong, brave and knows his stuff. However, he didn’t follow his brother when Doca started guiding. Finally, in 2016, he was called on by Neto. Neto was the manager of the first operations Rob had built on Xeruini. As a great guide and fly fisherman, Neto demands a high level from whoever comes on board. Rob and Neto used to say: “Guiding is not a privilege, it’s a job”. So, when another guide from neighboring Lago Grande village gave up as he felt intimidated by the requirements, Neto went after someone he knew since he was a kid and could trust entirely – Doca’s little brother Charlie.

Charlie admits that he was shaking in his flip flops that first day – he had heard that it was great to work with Rob, rewarded accordingly but the quality of work is far beyond what anyone had done before that. Straight in, one of his anglers caught a 12-pounder on the first afternoon of fishing. Neto gave Charlie fly fishing lessons and a card with English expressions for basic communication with the fishermen. 20-years-old then, Charlie showed himself as a dedicated student with the instinct to be a great. Charlie learned more about being a fly fishing guide in one week then most guides learn in a lifetime. Spending your first week guiding with Neto on your boat as your coach is any Amazon guide’s dream start.

Today Charlie is somewhat of our golden boy. He is as pure as they come and un tarnished by old habits or other ideas about guiding. He is basically an extension of Neto and Doca. Charlie is also a joy at the camp. You’ll see him playing the guitar and singing every evening for the guide team, interacting with the anglers and checking out how everyone’s fishing has been during the day. Charlie has been in fishing operations for a little over 3 years now but he still feels like he’s got a lot to learn. It is great to see him talking to our manager, Pelado, Rob, the anglers, Neto and Karim to check whether he’s doing good and what’s the plan for the next day. A number of anglers already demand to fish with Charlie every year and himself, a youngster from a tiny Amazonian village Terra Preta, now has friends in California, Nevada, Virginia… you see where this is going. 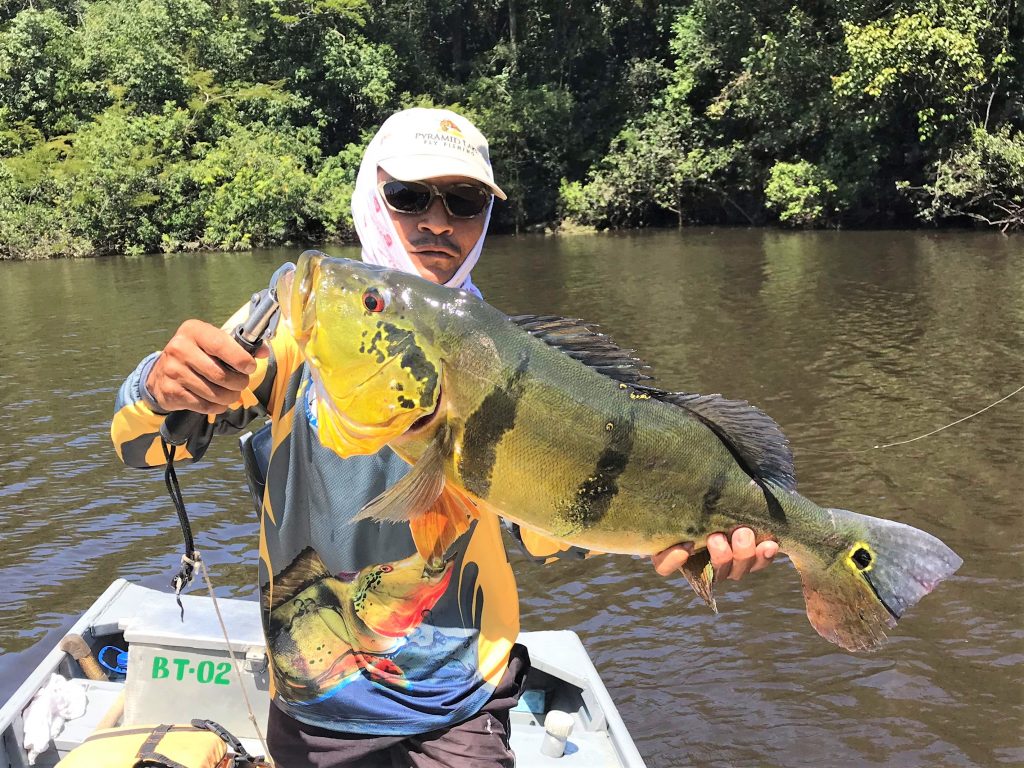 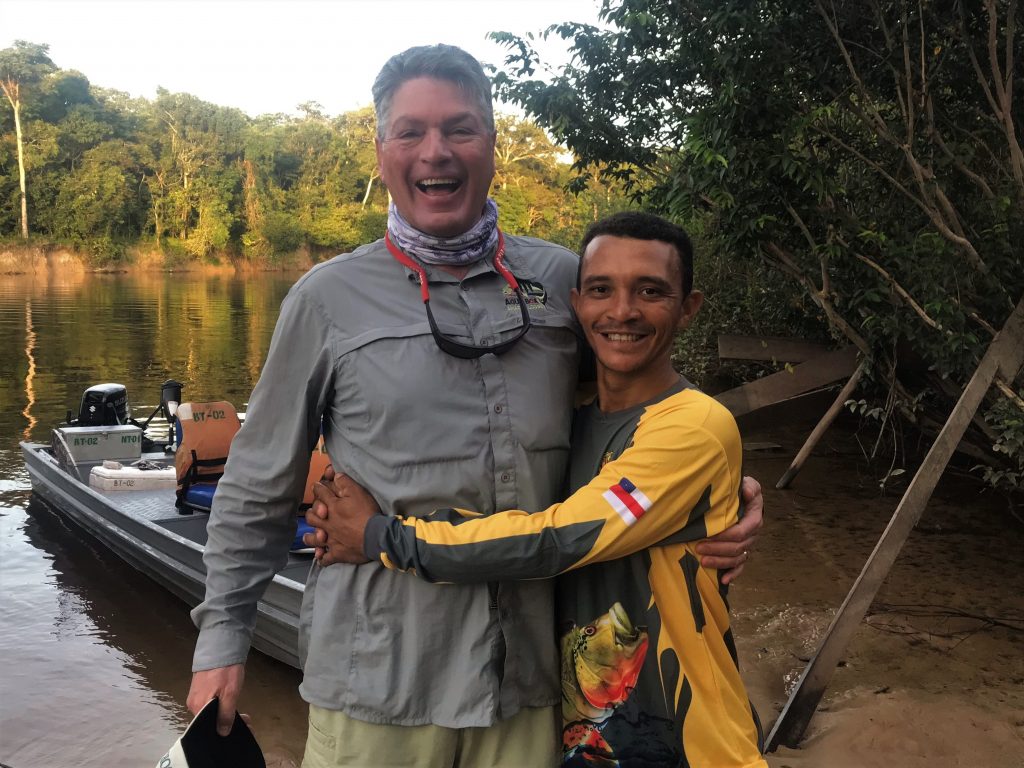 Charlie is a welcome member of the “A-Team” as we like to call it, Charlie is with us every season now, along with Neto, Pedro and Doca. In January 2020 we all ended up at Labirinto da Tartaruga, which was our Backup Plan and now is a permanent destination. There, Charlie entered “the Arapaima Club” – his anglers caught arapaimas on the fly. While we were testing mixed fly fishing/eco-adventure on week two, Charlie also showed interest and skill in spotting wildlife and finding what could interest our guests as an eco-tour guide – we found a great place to watch white-throated toucans thanks to Charlie. So, you will see Charlie not only on our fishing trips but also in our exploratory eco-adventures featuring his favorite childhood adventures…

A crazy situation that gave Charlie an opportunity to make money taking some Gringo’s fishing back in 2016 has turned into a Cinderella story. We are still not sure who got the good end of the deal here but all of us are happy to have this amazing man as a part of the Bucket List family. We look forward to seeing what the future holds for, who our guides call – “Chaz” or Charlie.