Where lots of flies were born

The story of the Maholo Fly or Maholo Nymph is a fun, interesting tale that begins in the tying rooms of the Original Reno Fly Shop. The fly shop, owned by Dave Stanley, opened in 1983 and eventually went out of business in 2010 for good when Dave needed to start another chapter in life to be with family and chase other dreams. During the shop’s existence it was one of the most well known fly shops in the country and even won the very first fly shop of the year award in 2002. The shop was always on the cutting edge and the personalities that turned on the lights each day were amazing. It was one of fly fishing’s great treasures. For 15 years the fly shop was blessed by a fly fishing rock star named Andy Burk. Andy was and still is one of the most creative fly tiers that has ever lived. Andy’s patterns are well known all over the world. Andy was always pushing the envelope when it came to anything fly tying. Andy would spend endless time testing and creating new materials. Opening U.P.S. boxes was like christmas day for the employees of the shop, wondering what Andy had found now. Daily the store would receive merchandise from some delivery carrier. The daily routine of “working a box” as shop employee Bill Ladner called it was quite entertaining. This particular day was no different. Rob Anderson remembered seeing more new fly-tying materials come in. Rob worked through the box of materials and in it was a new type of tinsel, Holographic Tinsel. Enthused, Rob finished out the day and before leaving, purchased two spools of this Holographic Tinsel, one in red and one in black. That night at home in front of the tying vise, Rob had a moment. Still fairly new to the tying and designing game, Rob was limited on creativity and skill. Rob knew how to tie a Pheasant Tail Nymph and this popular pattern became the nuts and bolts for the new fly Rob was about to create. The most significant change is Rob took this new Red Holographic material and replaced the body material of the Pheasant Tail with Holographic Tinsel. Soon after the Maholo Nymph was born. 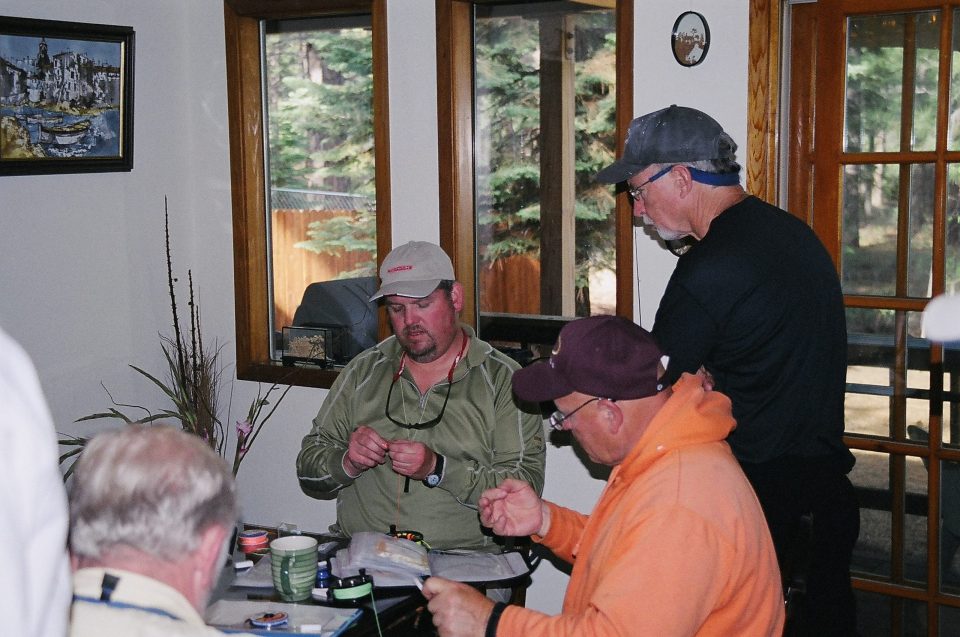 How to name a fly pattern

This was a time when indicator nymphing at Pyramid Lake was still brand new. It was not long before, when Rob Anderson and Chris Evison had that magical day on the lake that started the whole thing (see pyramid lake story). So over the next few days Rob and some friends all had a chance to watch their indicators sink over and over with the new fly on board – Back to the Bench – A few days later after work, Rob, Andy, Chris from the shop and good friend, Victor Marcus sat around the back room at the fly shop tying the new fly. As the group tied and laughed and carried on, Vic asked Rob “what are we calling this new fly”. Well, Rob had not thought about that so Rob turned to Andy for some help. Andy, who is essentially in the fly naming hall of fame says “gimme a minute”. So, the group goes back to tying etc. and a little while later Andy yells out “Mahalo” in a way to mimic someone excited about saying thank you to someone in Hawaii. So, then Andy tells the story of how this evolved in his mind. Andy says “You know, the indicator goes down and you always yell something like there he is, or Fish on, so why not yell Mahalo… or thank you”. So, the name of the now spelled M-A-H-O-L-O fly or Maholo Nymph, (to properly use the name of the material) was born.

The Maholo Nymph would forever help change the way we fish at Pyramid Lake. Word spread fast as more and more anglers started to fish indicator rigs at the lake. The Maholo Nymph, now being tied for sale and guide trips through the Original Reno Fly Shop, had become so popular that it was impossible to keep in stock. The next step was to take the fly to market and have it tied commercially to keep up with demand and the Maholo Nymph became one of the first Pyramid Lake specific fly patterns tied by Umpqua Feather Merchants and is still tied in three colors by them today. 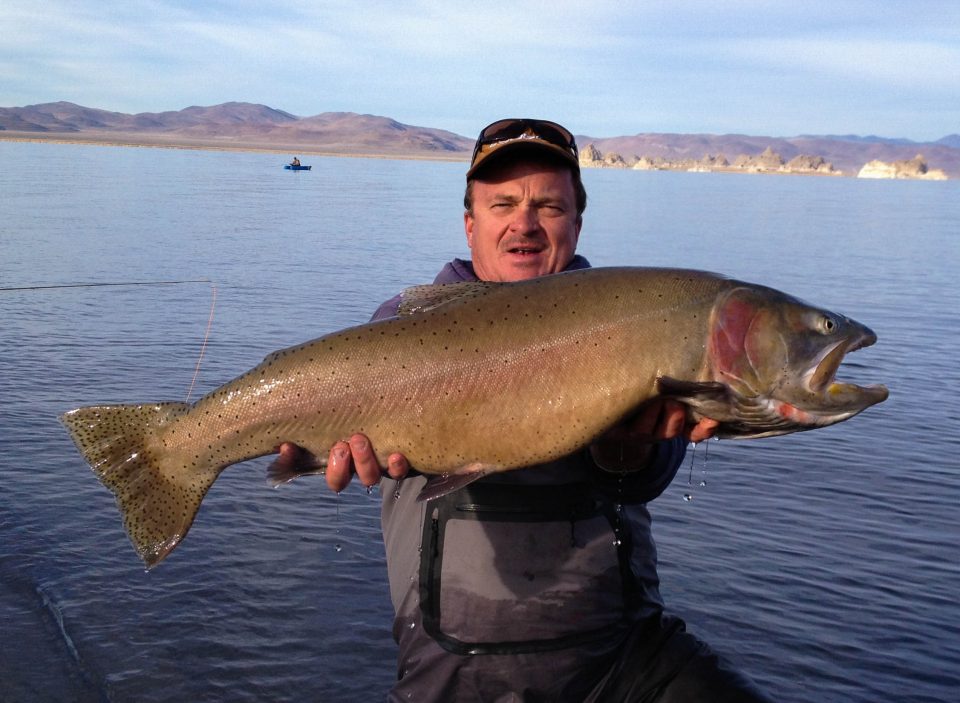 A Monster of a Fish

In November 2013 Rob was working on a half day guided trip with two young fisherman. The fishing that day was really good and Rob watched his two clients catch fish after fish all morning on streamers and a sinking line from ladders. As the end of the half day came to an end, Rob was not ready to call it a day. The three of them would agree to end the guided portion of the trip and to continue to keep fishing due to the success that day. Neither of the two first-time-to-Pyramid anglers had seen the other popular way to fish Pyramid these days with an Indicator and a couple of nymphs and midges hanging off the bottom. Rob set up his rig and started to fish next to his two new friends. After his 2nd fish in 3 casts Rob tried to trade rigs with one of the clients. Again after the 3rd and 4th fish. The fishing had been so good all morning the clients refused Rob’s request to switch. Even after the 4th fish turned out to be 9 pounds and bending out the hook on the bottom fly during the fight. Rob bent the hook back and made another cast. On the ninth cast the indicator went down for the 5th time and the fish came to the surface almost immediately. It was bigger than any fish Rob had ever seen at Pyramid. Luckily this fish ate the top fly, a size 12 Black Maholo Nymph and 10 minutes later was in the net. Some quick pictures and a couple of measurements and the fish was gone. Not before putting the fish on a 30 pound Boga Grip at 24 pounds. This fish is still one of the larger fish to come out of pyramid Lake on an indicator rig. These flies are also big fish flies as well.

Holographic Tinsel has become a very popular fly tying material since those days and can be found in a variety of fly patterns. One of the best things about the fly is that it can be tied in so many sizes, colors and even hook shapes to imitate so many different types of food for fish. Most commonly the fly is tied to imitate a larger Mayfly in its commercial shape and size but change the hook to a little longer shank and add legs to create a great StoneFly Nymph. You can use a more rounded hook to turn the fly into a generic Czech Nymph. We were pleasantly surprised to find this fly one of our favorite patterns to imitate scuds. When we took it to Jurassic Lake in 2016 the results were amazing. Size 8-10 olive, brown and black Maholo Nymphs quickly became our favorite fly while fishing for the Worlds largest Rainbow Trout that feed mainly on large Scuds and Snails. 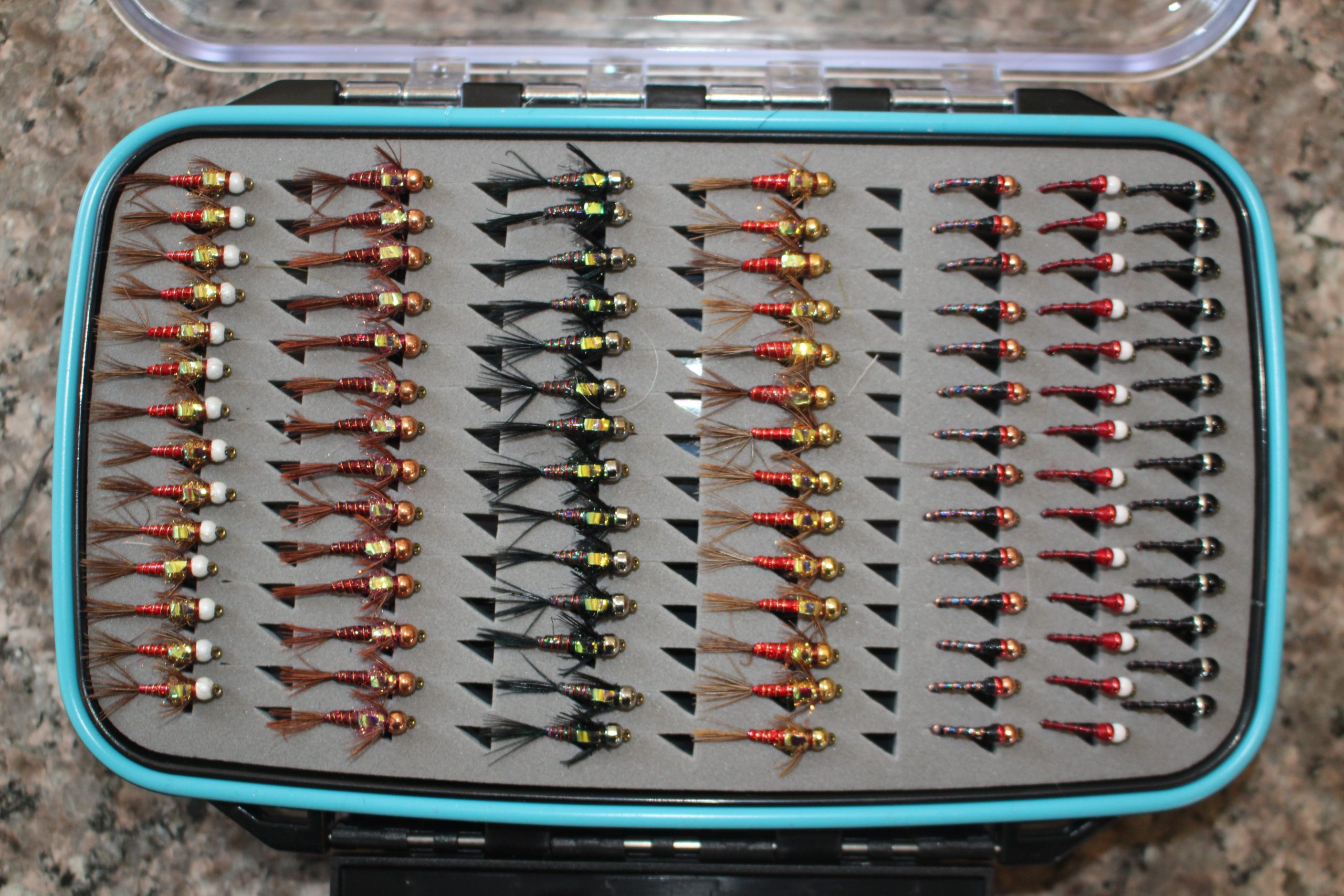 Where to find this fly

This fly deserves a spot in every fly fisherman’s fly box. The original pattern is sold in three colors all over the United States and fly tiers everywhere are inventing their personal imitations. This fly is sold now in Black, Red and Wine in Size 12 on www.pyramidlakeflyfishing.com and our new site www.bucketlistflyfishing.com as well. It will be one of our new additions in a larger size in several colors for our Jurassic Lake fly selections very soon. We hope you will give the Maholo Nymph a try some time and enjoy the success we have had on your next fishing adventure.  Mahalo…