Wine colored Tinsel was not one of the original color offerings. As soon as it became available, we knew it would be a much-needed color for both our Maholo Nymphs and Midges. This fly looks great in the water and tends to imitate a lot of different bugs that fish eat.

The Maholo fly story starts from Rob’s early days at the Original Reno Fly Shop. Daily the store would receive merchandise from some delivery carrier. This day was no different. As the daily chore of “working a box” continued on that day, Rob remembered seeing some new fly-tying materials come in. Working with Fly Tying Guru, Andy Burk always left a feeling that something new was right around the corner. Rob worked through the box of fly-tying materials and in it was a new type of tinsel, Holographic Tinsel. Enthused, Rob finished out the day and before leaving purchased two spools of this Holographic Tinsel, one in red and one in black. That night at home in front of the tying vise, Rob had a moment. Still fairly new to the tying and designing game, Rob was limited on creativity and skill. Rob knew how to tie a Pheasant Tail Nymph and this popular pattern became the nuts and bolts for the new fly Rob had envisioned. The only real change is Rob took this new Red Holographic material and replaced the body material of the Pheasant Tail with Holographic Tinsel. It was as simple as that, the Maholo Nymph was born.

This was a time when indicator nymphing at Pyramid Lake was still brand new. It was not long before, when Rob Anderson and Chris Evison had that magical day on the lake that started the whole thing. So over the next few days Rob, some clients and some friends all had a chance to watch their indicators sink over and over with the new fly on board – Back to the Bench – A few days later after work, Rob, Andy, Chris from the shop and good friend, Victor Marcus sat around the back room at the fly shop tying the new fly. As the group tied and laughed and carried on, Vic asks Rob “what are we calling this new fly”. Well, Rob had not thought about that so Rob turned to Andy for some help. Andy, who is essentially in the fly naming hall of fame says “gimme a minute”. So, the group goes back to tying etc. and a little while later Andy yells out “Mahalo” in a way to mimic someone excited about saying thank you to someone in Hawaii. So, then Andy tells the story of how this evolved in his mind. Andy says “You know, the indicator goes down and you always yell something like there he is, or Fish on, so why not yell Mahalo… or thank you”. So, the name of the now spelled M-A-H-O-L-O fly or Maholo Nymph, (to properly use the name of the material) was born.

The story of the Maholo midge is a much simpler one. A couple of months into the guiding season that year, Rob started running short on time. The guide business had seen a major increase due to indicator fishing and the Maholo Nymph. Rob was basically guiding during the day and tying Maholo Nymphs at night to keep up with demand. One night complaining to Chris about the long days about how long it takes to tie one of these flies, Chris says, “why not tie one Zebra Midge Style and see how that works”. So, rob spent the next hour or so turning the classic Zebra Midge into now what is called the Maholo Midge. The results were once again amazing at the lake and this new fly took way less time to tie. The inventory of Maholo flies started to grow with the idea of the Maholo Midge because now there were limitless combinations of Tinsel, Wire and Beads. The Baskin Robbins of Maholo flies had evolved dating back to the very first combination of black tinsel, red and copper wire and a gold bead whose sub name, J.W. is another story in itself.

The term Maholo comes from the holographic tinsel in the body of the fly. The story of how this fly was invented is featured on our website. The Maholo Nymph is a close copy to the Pheasant Tail nymph with the exception of the Holographic Tinsel. This is the original indicator fly used back in the early 2000’s at Pyramid Lake by Rob Anderson, Chris Evison and Andy Burk. It is without a doubt one of the most important flies in our fly selection and can be used under an indicator or stripped in slowly as a Stillwater Nymph in any lake situation. The flies are also very good fished in streams and rivers either under an indicator or “High Sticking”. 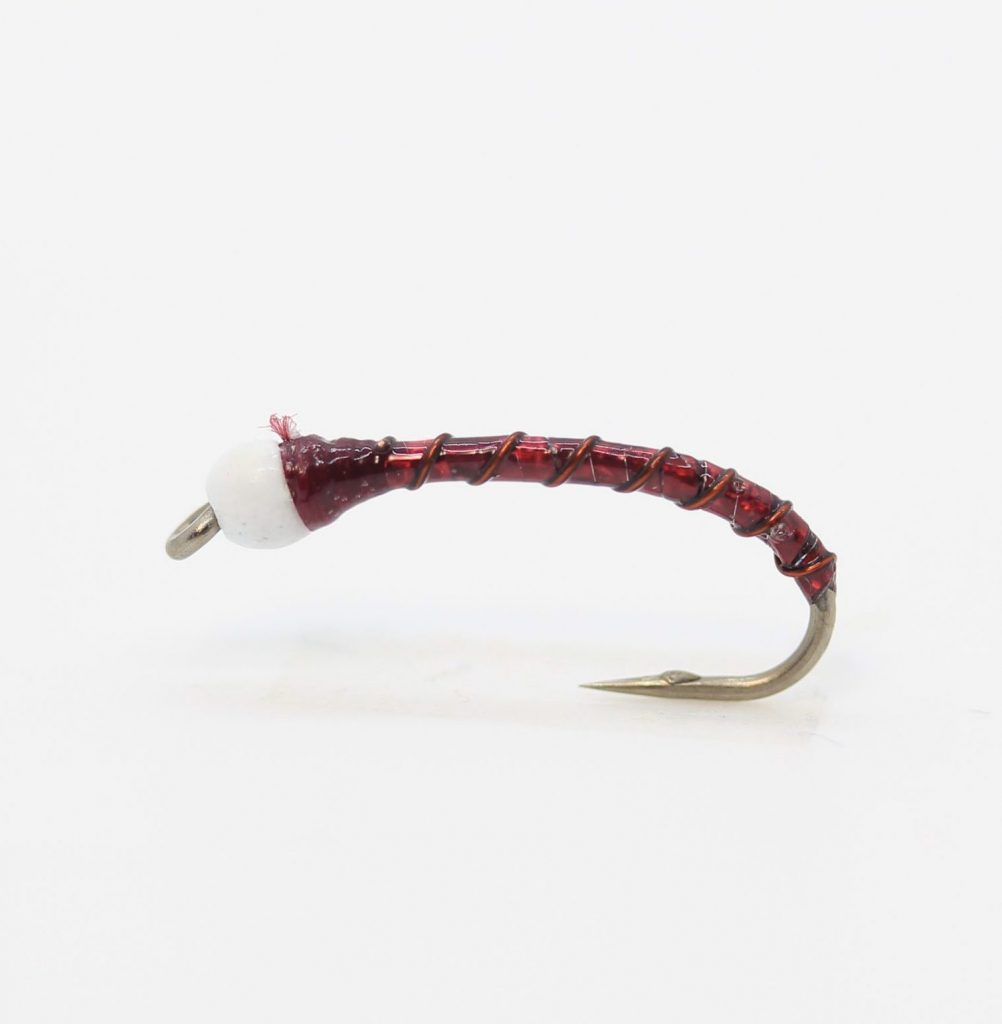 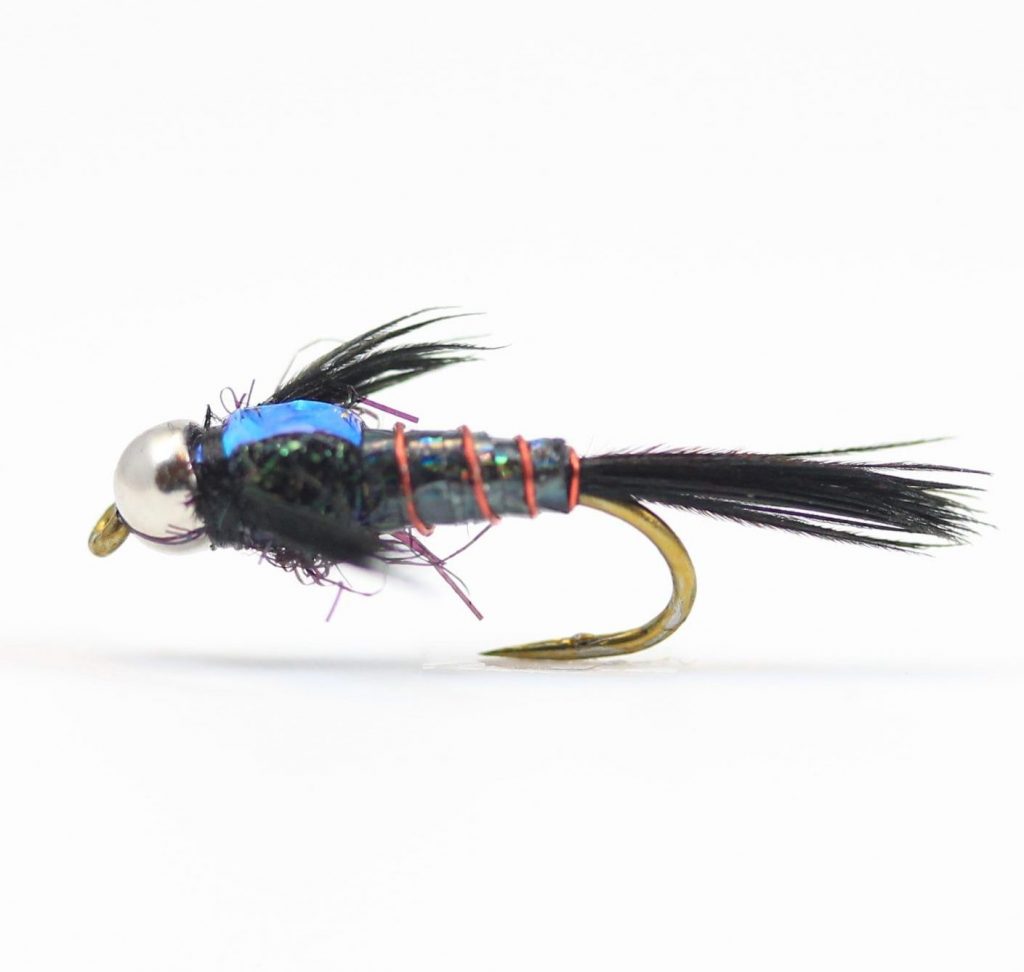