Evolution of an Outfitter

Experience, innovation and drive changed the culture of a lake

In 2002 in his 2nd year working at the Original Reno Fly Shop, Rob Anderson started wondering why the shop employees were spending so much time teaching anglers how to fish Pyramid lake from the confines of the fly shop. At the time there were no fly-fishing guides at the lake and no non-tribal fishing guides at all. Rob still remembers asking “why don’t we take people fishing at the lake?” The answer… “Oh Pyramid is on an Indian Reservation; we can’t guide out there.” Was always the answer. Later that year Rob found himself in a Pyramid Lake Paiute Tribal Council Meeting. On the docket to speak to the Tribal Council about the opportunity to guide, rob sat patiently. At the half way point of the meeting the Tribal Chairman approached Rob looking like a fish out of water in the meeting and asked “why are you here tonight?” After a brief discussion the meeting resumed and the Tribal chairman moved Rob’s place in line to the front. After a brief speech about the companies’ current guide service and the benefits to both parties of adding Pyramid lake, an agreement was reached to make Rob Anderson and the original Reno Fly Shop the first fly fishing specific guide service at Pyramid Lake.

Immediately successful, the guide service started to grow. Through email marketing, fishing reports and word of mouth, new anglers started coming to Pyramid Lake. The notoriety of the lake was growing and the guide service with it. The fishing technique to catch these large Cutthroat Trout in the lake was the biggest hurdle for the guide business. Anglers would need to make long casts with heavy lines with usually a fair amount of wind. In 2005 that issue would be solved. On the way home from a fishing trip to a very popular California Lake where indicator nymphing was popular, Rob Anderson and Chris Evison stopped by for a day at Pyramid Lake. Thousands of fish were in the shallows that day in the height of the spawning season. The fish were not eating the wooly worms and beetles being fished by the 50 or so anglers on the beach that day so after a break Rob broke out his Crowley Lake rig and started to hang a new fly, the Maholo Nymph he had designed, under an indicator in the middle of all the cruising fish. 6 hours and 50 fish later it was obvious that anglers had been overthinking the fishing at Pyramid for years. The Maholo Nymph would forever help change the fishing at Pyramid Lake. Word spread fast as more and more anglers started to fish indicator rigs at the lake. The Maholo Nymph now a commercial pattern, had become so popular that it was impossible to keep in stock. One night while sitting at the vise trying to re-stock the fly box for another trip to the lake, the idea of taking a Zebra Midge and using Holographic Tinsel like on the Maholo Nymph as the body and tying it that way. The fish loved it and now there was a much simpler pattern that took much less time to tie. The Maholo Midge is the most popular fly for indicator fishing at Pyramid Lake today.

With the ability of Indicator fishing at Pyramid came the next part of the guiding puzzle. Rob was now giving presentations on fishing around the west at fishing shows, fly fishing club meetings and charity events. Rob and the Reno fly Shop Staff had been throwing an Easter Sunday party at Pyramid Lake for years that included fly fishing instruction and a lunchtime Barbeque on the beach. This event helped put together the idea of group outings at the lake. Pyramid may be the perfect place to throw a fishing party. Unlike most fisheries, at Pyramid all the anglers in the group can fish together. The large sandy beaches at Pyramid were the perfect venue for clinics and all types of outings. In 2006 Rob hosted the first ever fly-fishing club outing at Pyramid Lake with the Fly-Fishing Club of Orange County. A huge fishing club in the Los Angeles area. The previous summer Rob had hosted an outing for the club at a private ranch called Goodrich Creek run by the Reno Fly Shop. The connection was made and an official outing put on the calendar for March of 2006. The outing was a huge success and would forever change the scope of guiding for Rob at the lake. 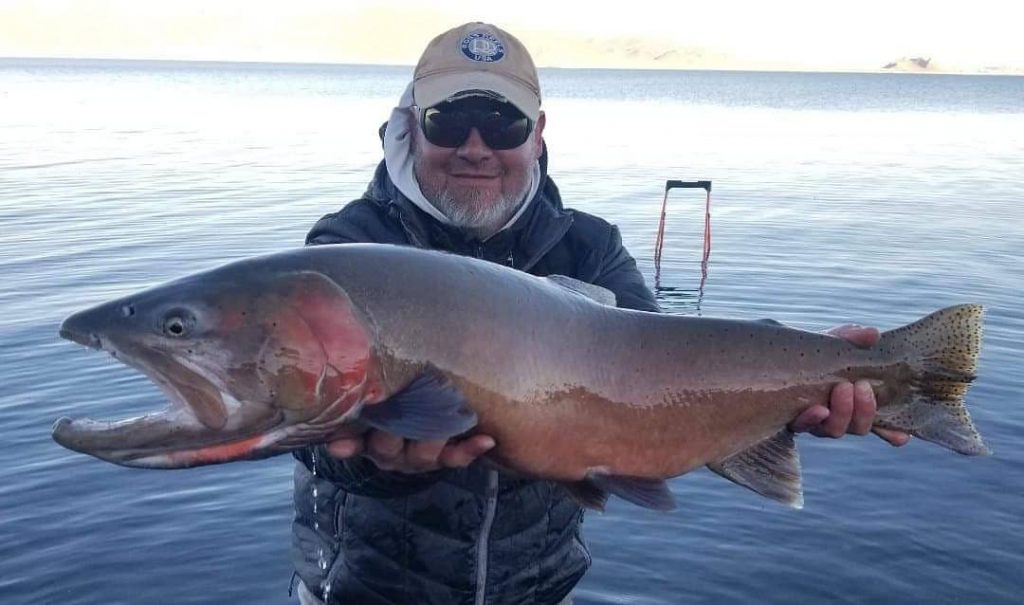 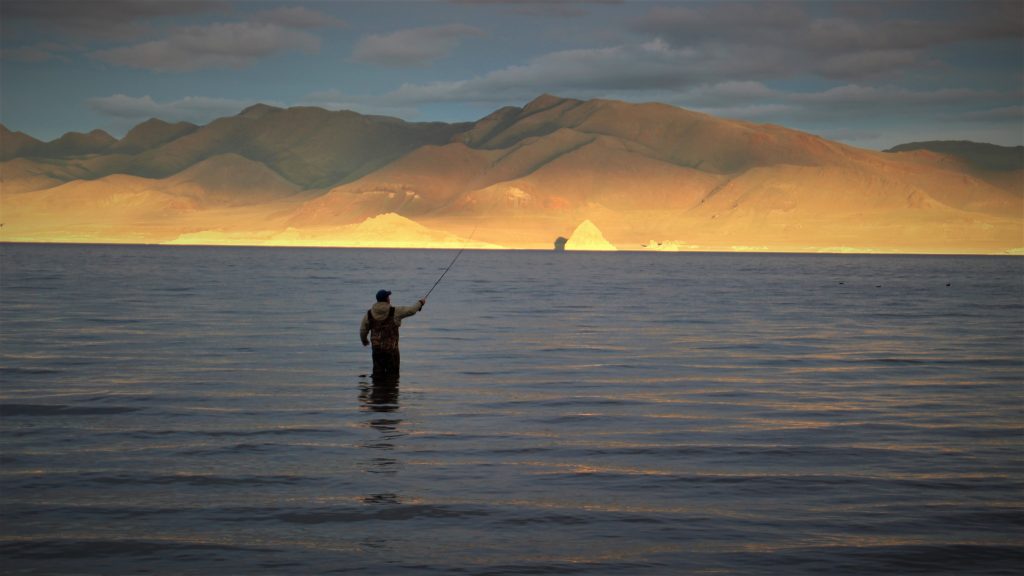 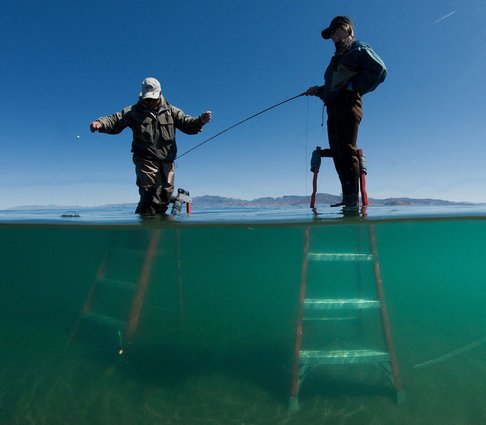 The next major event happened in 2009. The guiding and the programs run by Rob at the lake had become so popular that more and more of the guides at the Reno Fly Shop were looking to expand their services to Pyramid. The next step would be to build a website for the fisherman at the lake and the guide service. www.pyramidlakeflyfishing.com would be the first website of its kind providing fisherman with information that before would be very hard to find. Fishing reports, weather forecasts, equipment, accommodations and just about everything needed to take a trip to the lake.

At the end of 2010 the original Reno Fly Shop would close its doors for good. Modern day retail in the form of big box stores and internet shopping had taken its toll. This was a very sad period for the fly-fishing community. A small fly shop in Reno Nevada closing doesn’t look like that big of a deal on paper but the void left by the once “Fly Shop of the Year” is still felt today. Although the Retail operation would end the guide business would continue. Without a retail operation and a brick and mortar location the local guide business would take a serious step back. All but Pyramid Lake, the website and Rob’s notoriety would keep the Pyramid Lake guide business going. Over the next few years, the guide business would continue to grow. More and more group outings were coming on board and Rob and Chris Evison would continue to be the busiest guides at the lake.

In 2006 a second strain of Lahontan Cutthroat Trout would be introduced to Pyramid Lake. This strain had been studied for years and DNA testing proved that this strain of trout, void from the lake for over 60 years was indeed that original strain from the lake before a complete die off in the late 1940’s. It was not until around 2012 that the new strain of fish started to get some traction. The brood stock was limited and only a few thousand fish were being put in the lake each year. The first 20-pound fish was caught in 2012 and several more to follow that year. In March of 2013 Rob would catch his largest fish to date of 24 pounds on a size 12 Maholo Nymph.

In 2014 Rob would host the first ever “Pyramid Lake Celebration”, an event put together to have Pyramid Lake anglers come together and have a chance to meet and hang out off the water. Thousands of dollars of fly-fishing related prizes would be given away. There were several presentations and overall, the event was a success. The event is still held annually and is now a very successful charity event. Major fly-fishing companies are now involved and fantastic guest speakers are brought in each year to talk fly fishing. Charities who benefit include Amplify Life, a kids with disabilities foundation, Indigenous tribal fund to help villages in the Amazon and the Pyramid Lake Paiute Tribe fisheries department. 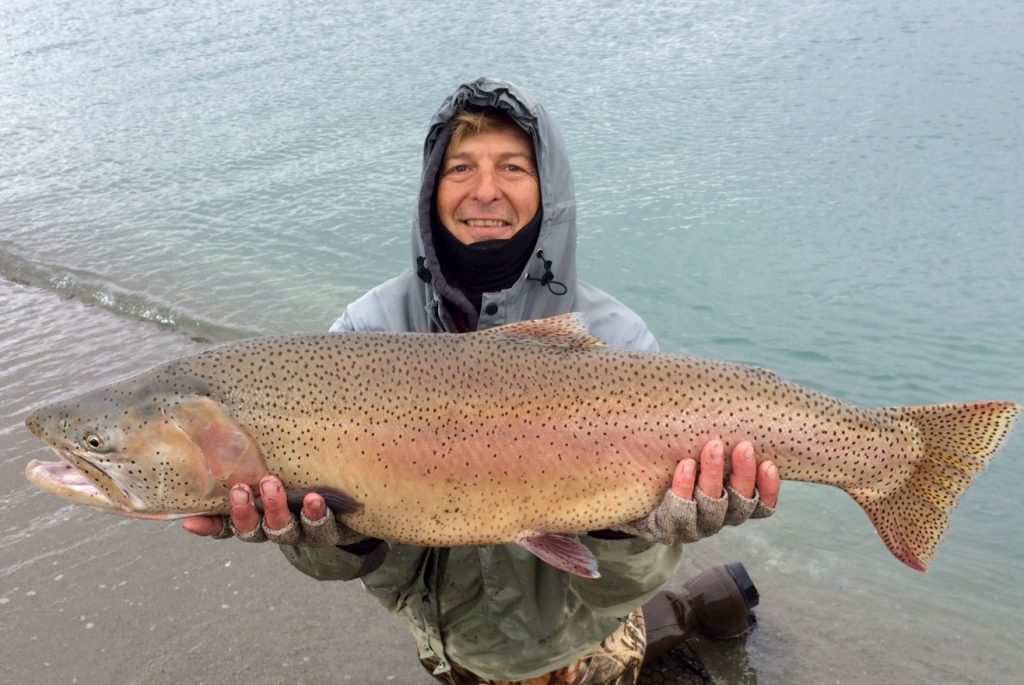 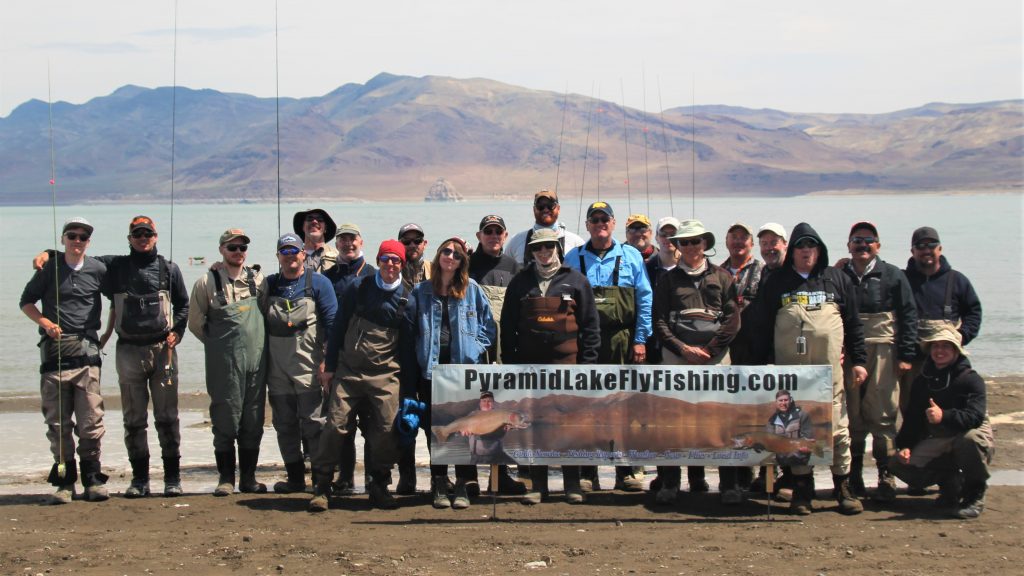 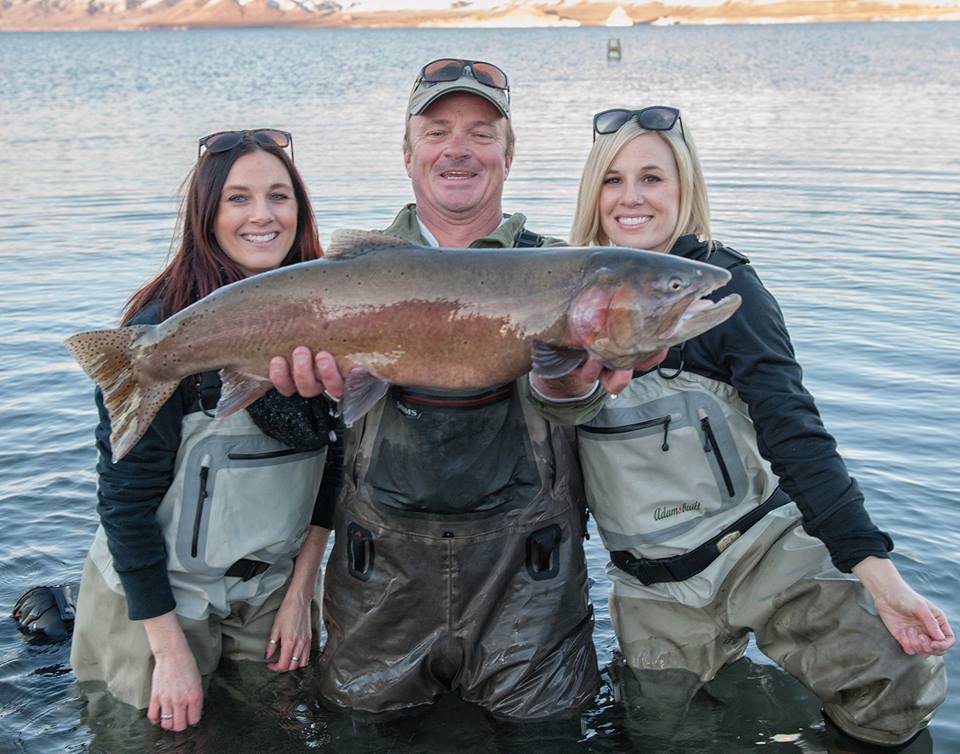 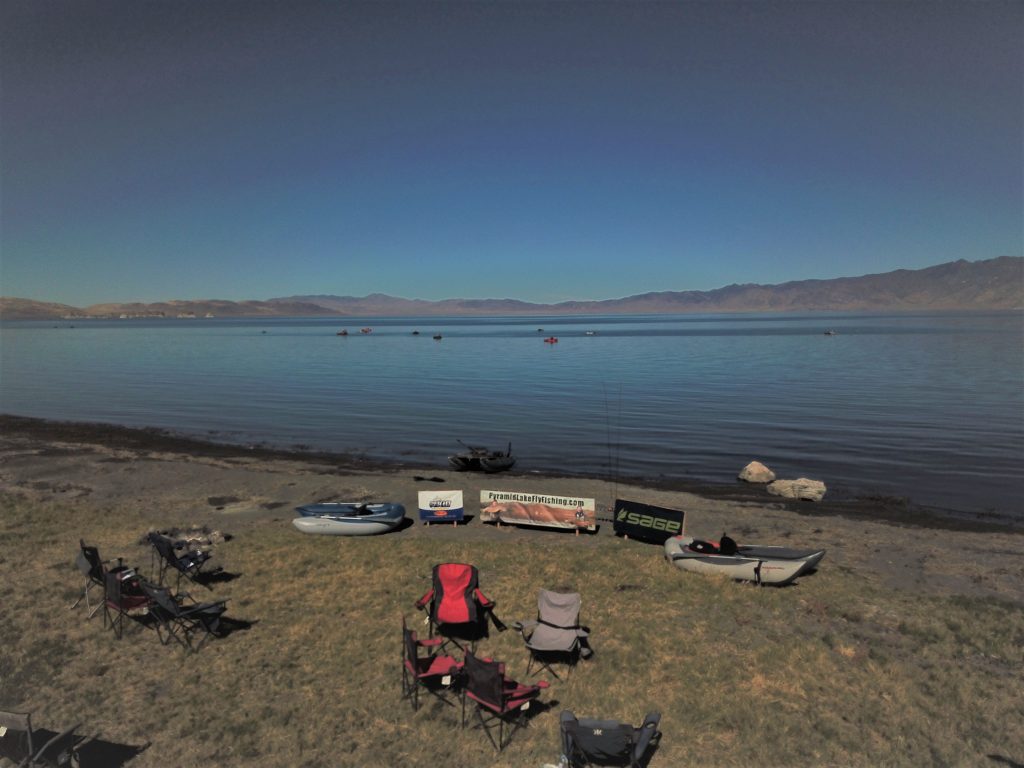 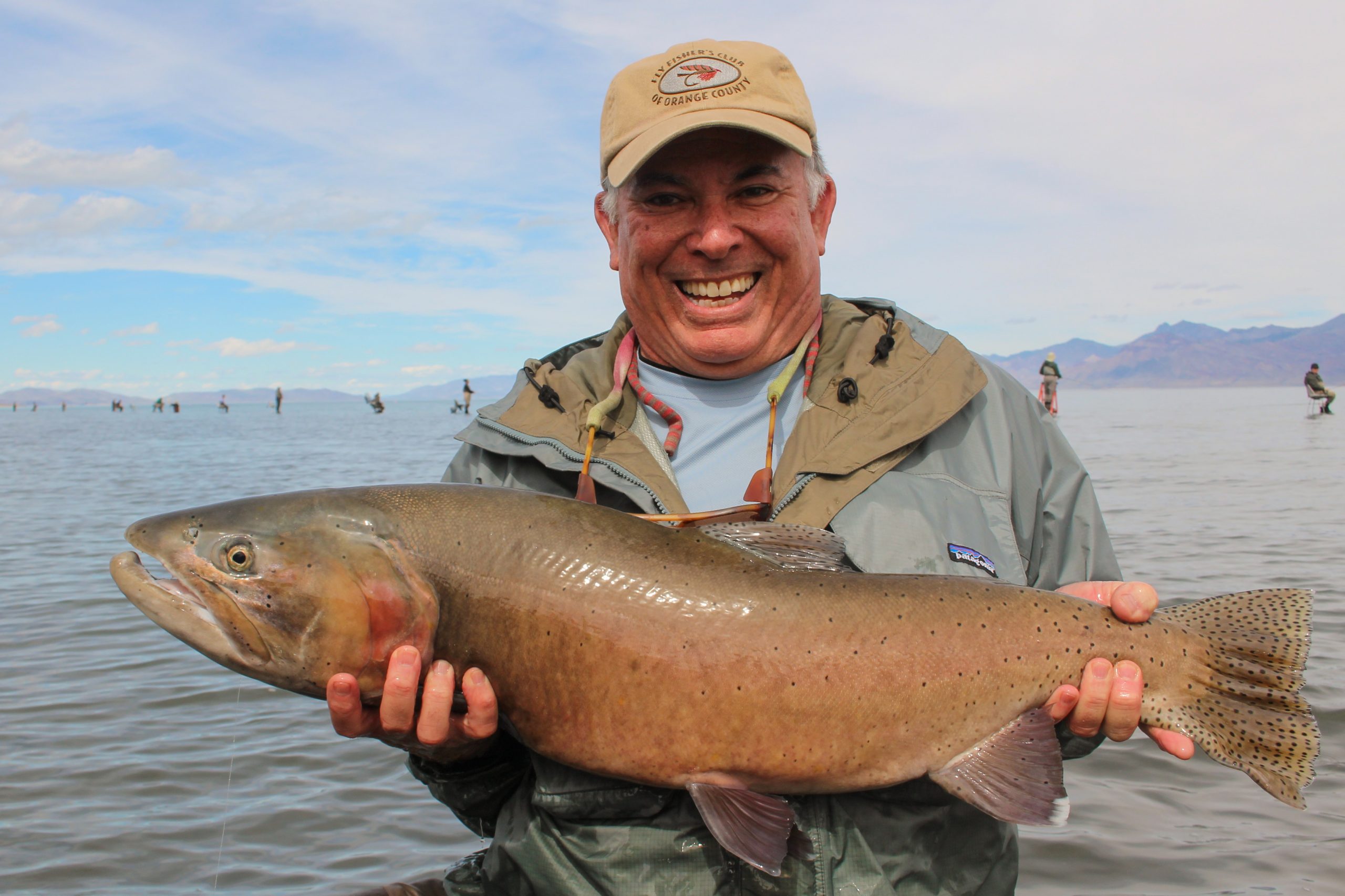 By 2016 the new strain of Lahontan Cutthroat Trout, deemed the Pilot Peak Strain had left its mark on the lake. 20 pound plus fish were common now and the popularity of the lake continued to grow. The guide service was exploding. Over the next couple of years Rob and his growing team of guides were now doing 200 guided trips a year at the lake and over 30 annual large group outings. It was becoming more evident each year that the two strains of cutthroat were not acting the same. The older strain was smaller on average, grew slower and fed more on bugs around the shallow water in the lake. The new strain however was more aggressive and as the fish grew larger, spent more time feeding on the Tui Chub minnow population in the lake. In October of 2016 the first Fall Float Tube Outing was held. A new fishing pattern had been discovered. The Tui Chub minnows would spend the better part of the summer months in the warm surface waters of the lake and use the top water column to hide from the feeding trout. At 70 degrees or so in the summer the surface of Pyramid Lake had less oxygen and was not a preferred holding spot for any Trout. The Trout however would stage near the huge bait balls in 20-40 feet of water. The crew would use Float Tubes, Pontoon Boats, Kayaks and Boats to get into the deeper water just off shore to target the huge trout laying in wait. This same situation would happen again every year in late May and June before the lake closes each year for the summer. The guide service which was for years limited by the short amount of time the trout would spend in shallow water, now had a sort of second season.

Currently the two strains of trout co-exist in the lake and both are an important part of the fishery. The two together have lengthened the season due to their different habits and the lake can be successfully fished almost all season. (Oct. 1 – June 30). Pyramid Lake has become one of the best Stillwater trout fisheries in the world and boasts the world’s largest Cutthroat Trout. The Pyramid Lake Fly Fishing guide service is easily the largest guide service at the lake and have 14 former or current world records, have clients catch over 200 10+ pound cutthroats each year and still have the most complete guided fly-fishing program. The Pyramid Lake Lahontan Cutthroat Trout and the Pyramid Lake Fly Fishing Guide Service has put this destination on many anglers Bucket List.