An amazing story of dedication, fatherhood and village life

Imagine a guy barely 5 feet tall, 110 pounds soaking wet, carrying a 120-pound sack of Brazil Nuts for an hour through the jungle to get them to a canoe, then paddle with 7 of these for another hour through the flooded forest to get to the main river and then travel with 50 sacks total for a day in a homemade village boat to get back to home. He gets there to take care of his son, Felipe who at the age of 11 can’t walk or speak, so he needs to be carried around all the time. See, his son has Cerebral Palsy that was caused from lack of oxygen to the brain at birth (more on that in Felipe’s story). Then he has to collect bananas, manioc, watermelons and clean his boat. You’d think a guy like that would spend his days gloomy and doomy, complaining about how hard life is for him. That is exactly the opposite of the reality. Meet Doca, the owner of the most cheerful smile in the Amazon. This story is about a way of life that could never be outdone.

Terra Preta, Doca’s home is an interesting village. There are 35 families living there. It sits on the lower part of the Xeruini River, 6 hours away in a village liveaboard boat from the meeting of the Rio Branco and Rio Negro. Add another 22 hour ride on a three story commercial passenger boat with no sleeping quarters and 350 people aboard in hammocks and you’re in Manaus, the most developed city in Brazilian Amazon. It’s a long, complicated trip with many variables, so, would you do it if you lived in a place like Terra Preta? Well, if not for his son’s health condition, Doca wouldn’t – just like the rest of his family. Doca actually was 15 years old when he made his first trip to Caracarai, a municipality on the Rio Branco a day away in a liveaboard boat and was his first trip from the village.

Doca was born in 1985 and he’s got 3 sisters and 5 brothers. He is married to his wife and they have 2 kids, Gabriel and Felipe. His father, Paulo Miranda de Vasconcelos is 70 now. Paulo has barely been to town himself and never saw a hospital or taken a vaccine. The family have always been farmers called “plantadores” – growing food wherever they could. Doca, like his father before, has to feed his family. The Xeruini River doesn’t let you starve if you’re ready for some hard work. Fish are abundant, the water is clean, forests are full of game and the soil is rich, so it’s not hard to plant. Well, maybe planting is not a big deal in the Amazon, harvesting, though, has always been a challenge: pulling manioc from hard soil is a tough job, in the middle of a banana grove you can face scorpions, spiders and venomous snakes and to get açaí, a wonderful fruit that provides energetic juice, you need to climb a dozen 50-foot-tall palm trees using “peconha” – a palm leaf knot around the ankles invented by indigenous people of the Amazon. Doca’s father still does it all at the age of 70. It is a 4 day process of making manioc flour that results in a number of products of their daily life: farinha (manioc flour), tapioca, tucupi and more. Like most of the women in the area, Laura, Doca’s mom is used to taking care of numerous kids and the house, but she is also good with a gun and fishing gear. It was with his mom that Doca learned to swim, how to fish and to paddle a canoe which was his favorite thing to do as a child. Sneaking out of school and going around Xandoca island in front of the village in a canoe, used to be the greatest thing on Earth. 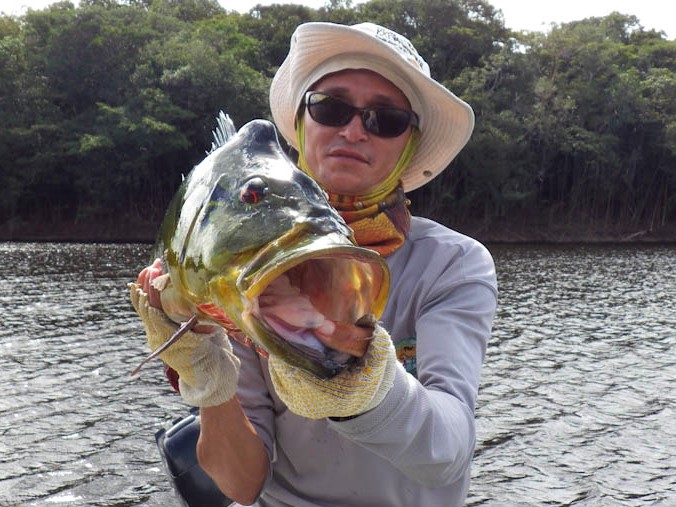 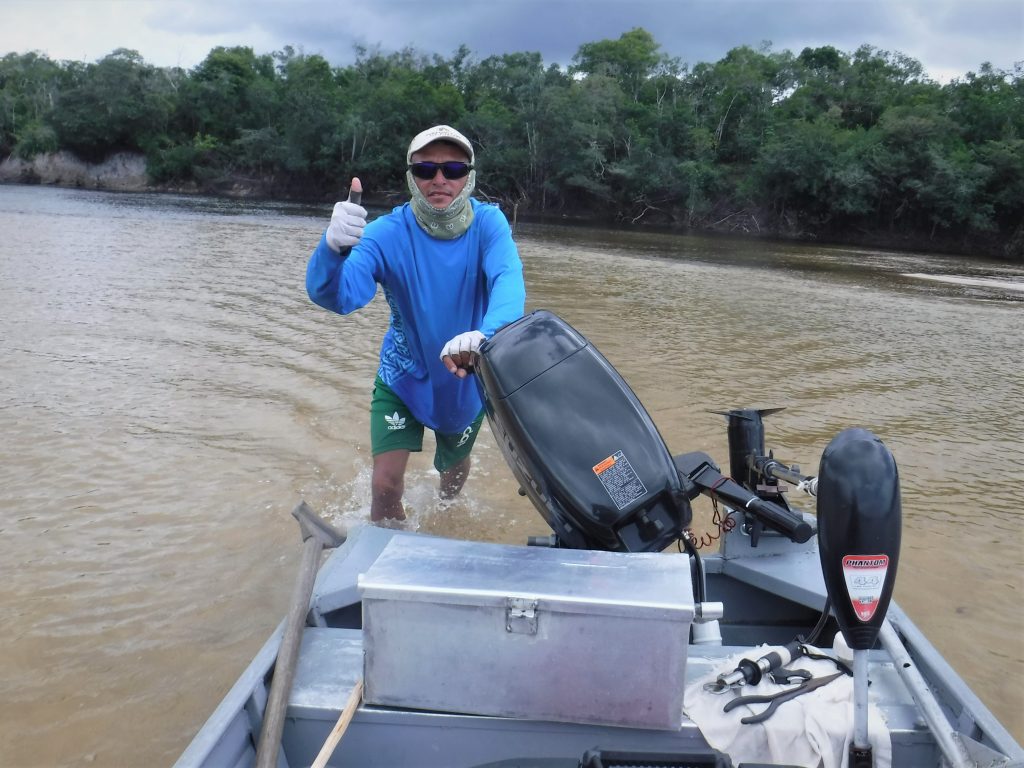 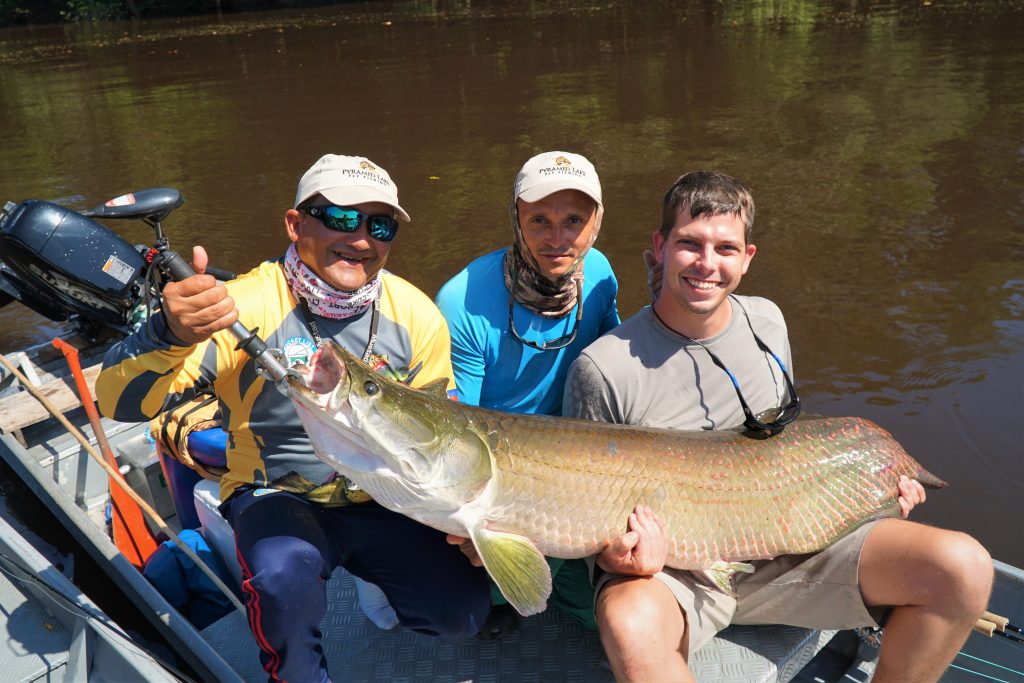 Doca grew up in a tough but happy family. He learned to work hard but carry a smile from the age of 12. In villages like Terra Preta a kid starts helping parents as soon as they are fit. For example, carrying an 80 pound sack of Brazil Nuts that villagers harvest at the headwaters of the Xeruini every year. Castanhal, a natural Brazil Nut Tree forest not far from the mouth of Rio Novo is a true paradise. Clear streams of the Xeruini headwaters are shaped by white sandy beaches. The river and lagoons are loaded with fish. Birds, especially macaws and toucans, which never migrate from there due to the abundance of Buriti (Moriche) Palms and Brazil Nuts. Back at the turn of the 20th century Doca’s Great Grandparents came to this part of the province of the state of Roraima attracted by abundance of tapirs, manatees, jaguars, capybaras and margays. Indigenous people from around Barcelos (East of Manaus) came in the 1950s because they had heard of the Brazil Nuts, most of which were rotting on the ground and eaten only by Agoutis (a small rodent) and the birds. That’s why the first villages, founded by men and women like Doca’s grandparents were closer to the upper Xeruini, no matter how isolated that was from the rest of the world. The trips to headwaters for Brazil Nuts is still Doca’s favorite adventure. He laughs telling stories of him and his brother carnival getting back to the riverbank after five days camping and collecting nuts and finding their boat at the bottom of the river, flipped over by a storm. It took a full day to get it out of there, the engine was lost but luckily the village was downstream and they eventually made it back home.

In 2012, Doca met Rob for the first time. Rob was on a fishing trip to the lower Xeruini near the village. It was Doca’s first time seeing a fly rod. Doca and his brother, Charlie, used to make their baits from a piece of red cloth tied to a hook when they were 10 years old, so, when they saw fly fishing for the first time they were excited. Since then, working with Rob and the people he’s been bringing along was something they treated as a privilege. It was only natural that Doca would tell the story of Rio Novo and the magical place on the river to his new fly fishing friend and when the opportunity finally came to take people fly fishing on Rio Novo, Doca could not wait.

Exploration of Rio Novo is a story apart, at some point you’ll meet our team that machete-ed through its mouth to see a fishing paradise. In 2019, our first year fishing Rio Novo, we had to find honey holes and spots for the biggest fish. Those were often land-locked lagoons. The boats would be dragged through the jungle to get to them. Getting the boats to lagoons often meant putting the whole team together. Clearing a path took some jungle sense, and sometimes logs would be laid like train tracks on the ground to push the fishing boats across the jungle floor. Everyone would pull, push, carry, strain and sweat all while shouting out how much they loved Rob and his crazy ideas. Well, jokes apart, it is admirable to see Doca not only show off his strength, but have fun all the way. Every day, no matter how hard it is, he’d be back in camp, washing his guide boat, preparing his clothes, singing with his fellows, reading the Bible and giving haircuts to the staff. Oh yeah, Doca is also the village barber. At night the staff  gathers for dinner and share stories of the day and Doca, who has a funny Brazilian accent and speaks so loud that you can hear him on the other side of the camp, always shows the most compassion. He is always worried about the fishermen in his boat, if they are happy, well rested and ready for the day ahead.  He is animated and disappointed even when someone loses a small fish. He’ll forget the language barrier, take the anglers rod and start gesturing energetically in Portuguese until he’s sure everyone on the boat has his point. We make fun of him, but ask to be in Doca’s boat again tomorrow. . 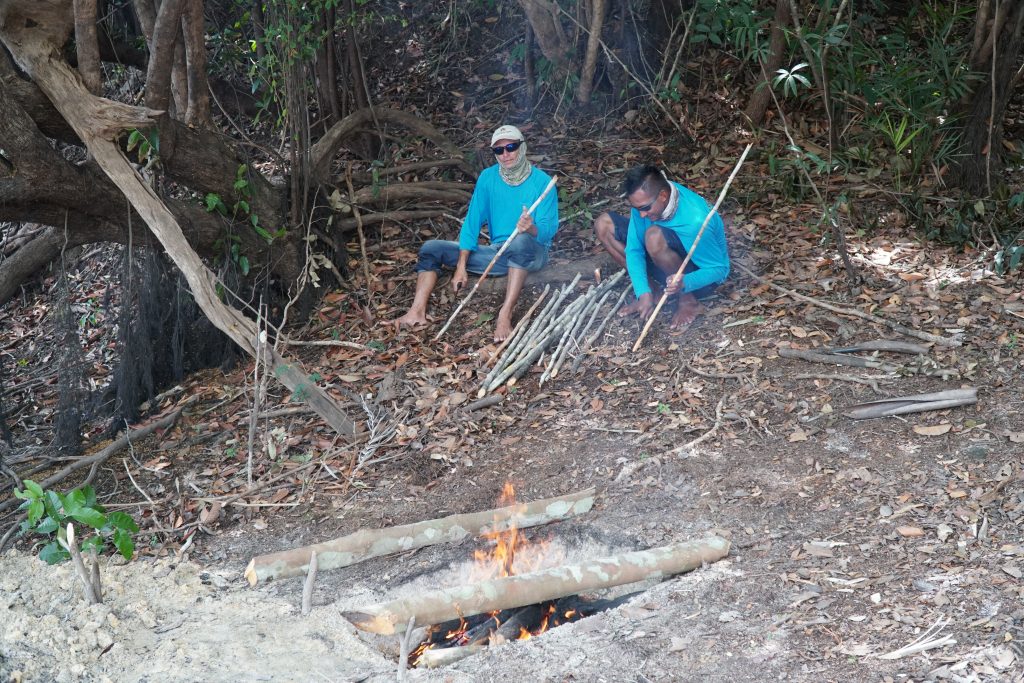 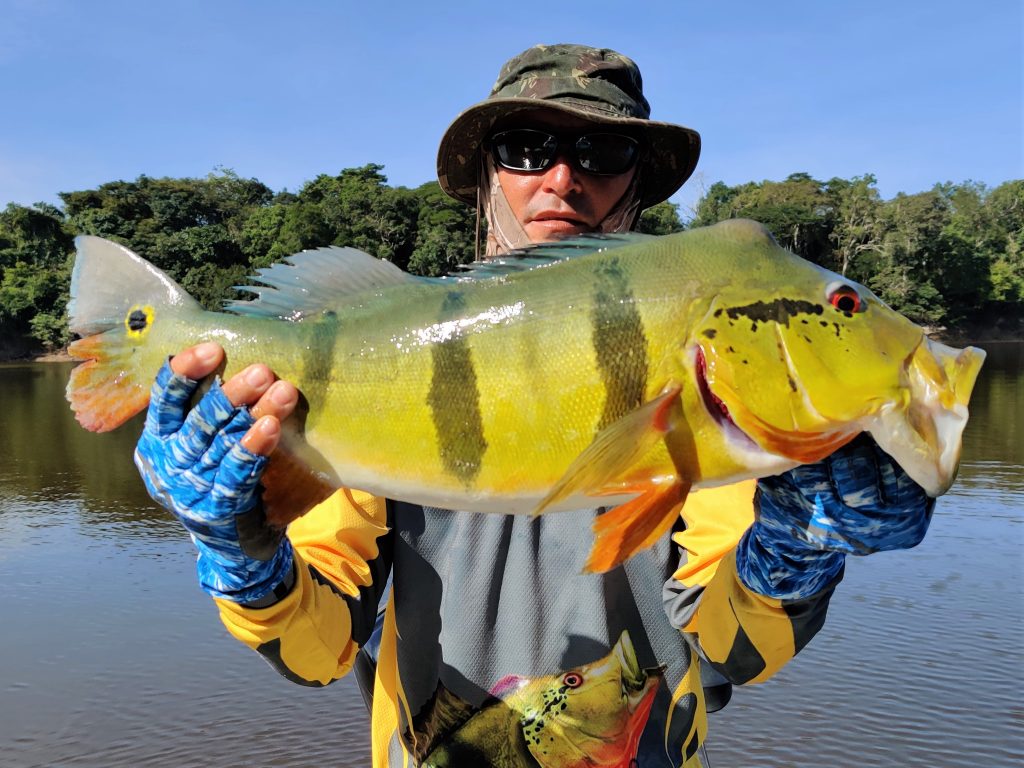 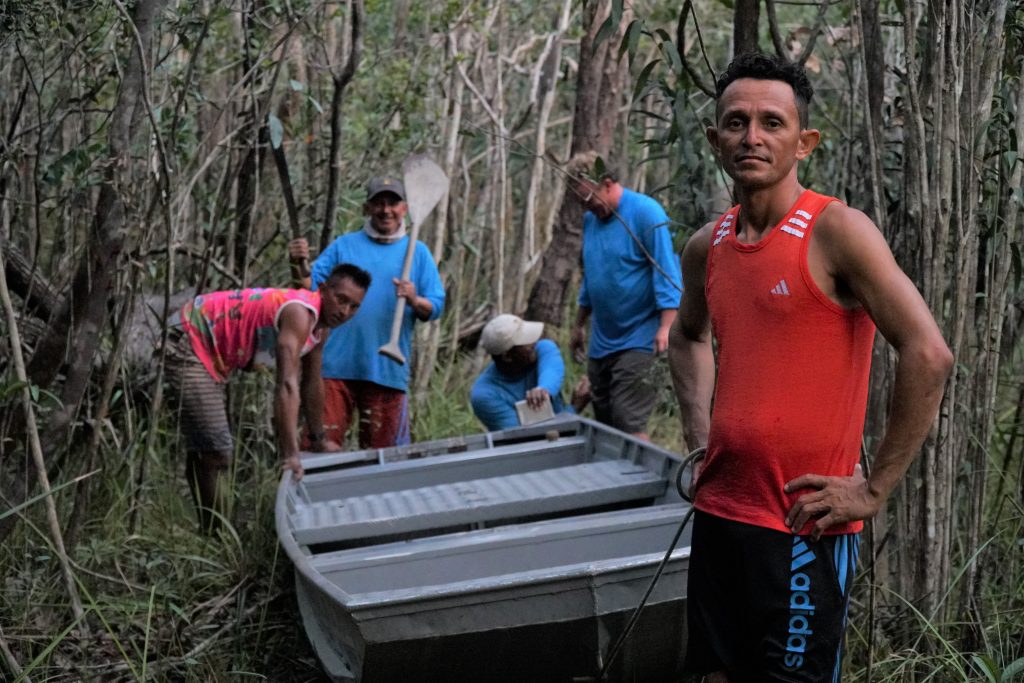 Doca is a happy village man. With all the difficulties of raising his kid that has cerebral palsy and is a tetraplegic, he still enjoys time with family and would not trade the peace of living in a remote riverine village for anything. He loves sharing every detail of village life, toasting manioc flour, hunting, fishing and exploring the unknown. He is encouraging us to put together an expedition to “Buritizal” – a part of Xeruini River Preserve where hundreds of macaws and parrots get together. As a curious man, he never quits learning more, like indigenous remedies or boat building techniques. People like Doca, who put gratitude before expectations, find joy in simplicity and are proud of who they are and make us feel we’ve been doing the right thing. If the future of the Amazon lays in hands like these, there is no need to worry, everything is going to be A OK…