Flying planes, fly fishing and drinking beer is not a bad way to live

Rob met Sam for the first time in Pleasanton California in 2014 at the annual Fly Fishing Show. Sam had sat in on Rob’s presentation on Peacock Bass. Sam looked like the rest of the, getting old too fast, retired and living in California, looking for more information, fly fishing club member that Rob would run into at these kinds of events. What we were about to find out was Sam was more of an Airplane flyin, harmonica playin, world travelin, under a tarp in the jungle sleepin, Arapaima chasin, country servin, business ownin, beer drinkin, push-up champion. Needles to say Sam’s story is gonna be worth the read.

Sam was born in 1938 in Mississippi and Moved to New Mexico just after that. As a kid Sam did some fishing with his father but there were not a lot of places to go. So Sam spent a lot of time working weekends and summers at his dads building supply business. Sam’s first car was a 1931 Model A in which he bought for $55.

He went to college at New Mexico State and soon after joined the Navy where he became an officer. His last tour of duty was aboard a river boat in Vietnam.  After the navy Sam moved to Santa Cruz in 1967 and the age of 29, started a company he still owns today called TOTLCOM which manages telephone and Data systems all over California.

Sam is a pilot and his story of flying airplanes is more interesting than his fishing stories. Sam got his Pilot’s license in 1974 followed by a commercial, instrument and instructor license as well. In 1976 Sam and a buddy flew their girl friends to Panama for a long weekend. These types of trips got longer and longer until in 1982 when Sam and his now wife Elana took a trip that would end up being over 21,000 miles (The circumference of the earth is 25,000) and was to the tip of South America, Cape Horn, lasted 40 days and included a few days to visit Elena’s relatives in Argentina. 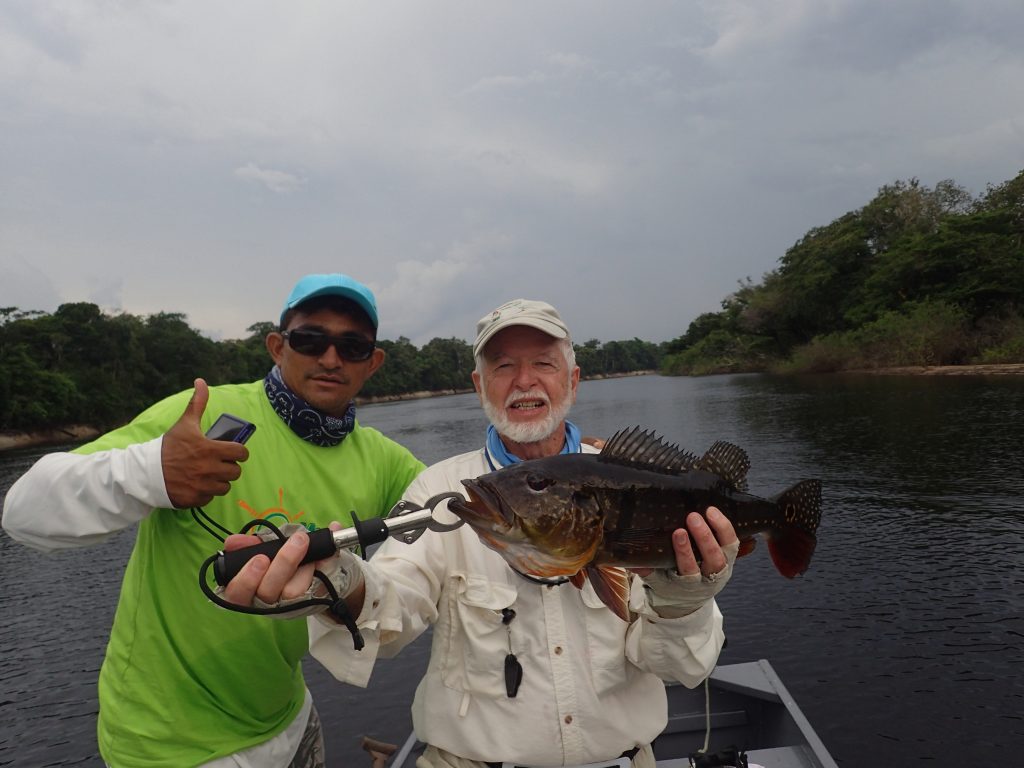 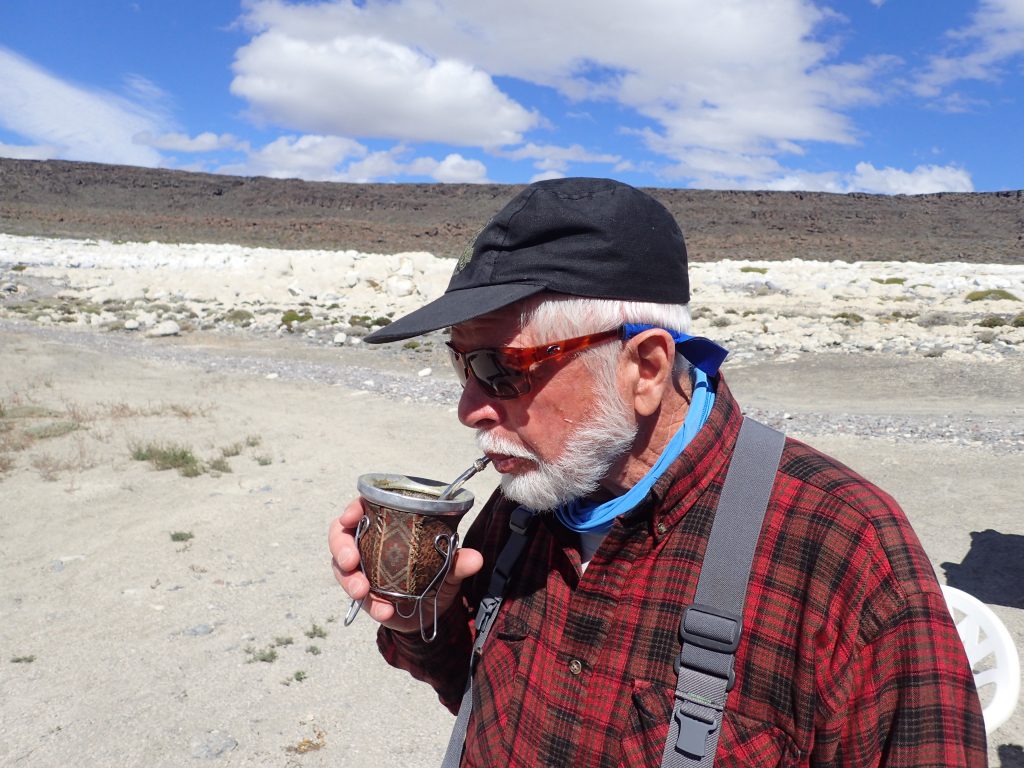 Sam joined Los Médicos Voladores (The Flying Doctors) in 1976. Well over 200 times they have taken doctors and dentists to villages to provide primary medical and dental care and Sam is still active in the program today. Sam is a member and past World President of the International Fellowship of Flying Rotarians (IFFR). Once a year they have a fly out somewhere in the world. When the fly out is in the USA, they take foreign pilots and families with them in their planes. When it is in Europe, Africa, Australia or New Zealand, they fly with their pilots. So as a result Sam has flown general aviation planes in all the continents except Antarctica and once across the Pacific from Australia to California.

All that and we have not even picked up a fly rod yet, Here it is in Sam’s words…

First Fly Fishing? In Canada, near Whitehorse. In 1996 we (IFFR) were on a fly out with several other planes on the way to Alaska and were stopped in Whitehorse for a couple of days waiting for weather to clear ahead. I went down to a local fishing shop and bought a Scientific Anglers kit. Had the fellow put it together because I had no clue. Fished with it for a few years, caught a bunch of trout, but could not cast it more than about 30 feet. I Thought I was just uncoordinated. Then after I joined my local fly fishing club, we were out at casting practice. A lady watched me, then came over to see why I could not cast any distance. She tried my rod and could not either. Then she stripped the line off and showed me the line was on backwards! The next year I won the casting contest.

A decade or so ago, on an exploratory trip to Central America I fished for the giant freshwater tarpon in the interior of Costa Rica and Nicaragua. One I hooked was estimated at 180 pounds by the guide. This fish actually scared me. Then I realized why, in that area you only “raise” the fish to be successful. A tarpon like that in the boat would destroy it. Last year my wife and I flew to Florida, then across Cuba to the Cayman Islands. There I was lucky to finally catch a Tarpon.

Sam with his new obsession, fly fishing has fished in 22 countries and has had the privilege of flying in his plane to many of them. Locally Sam fishes the beaches around Santa Cruz where he still lives and often helps fishermen from his fly club to learn the art of surf fly fishing. 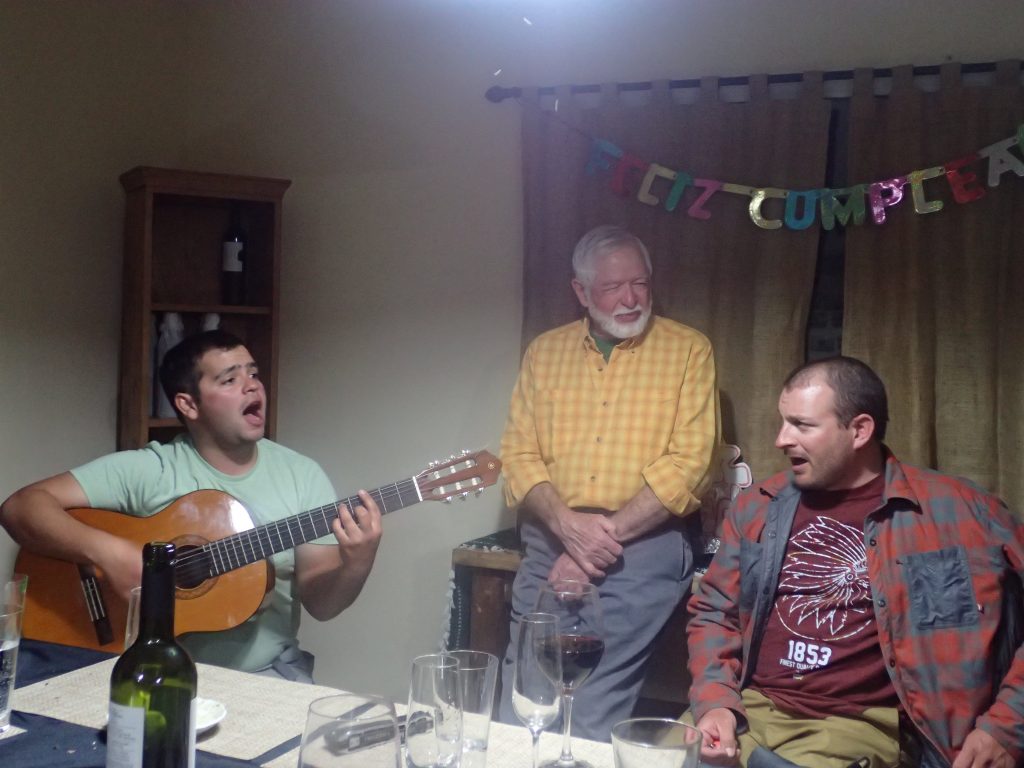 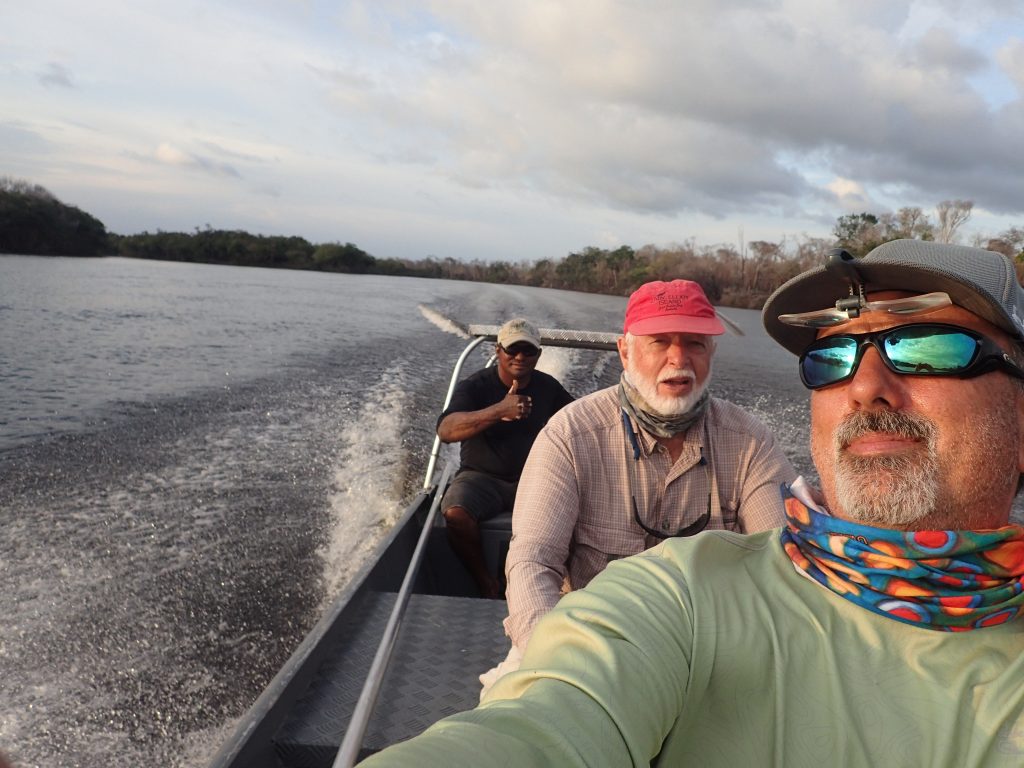 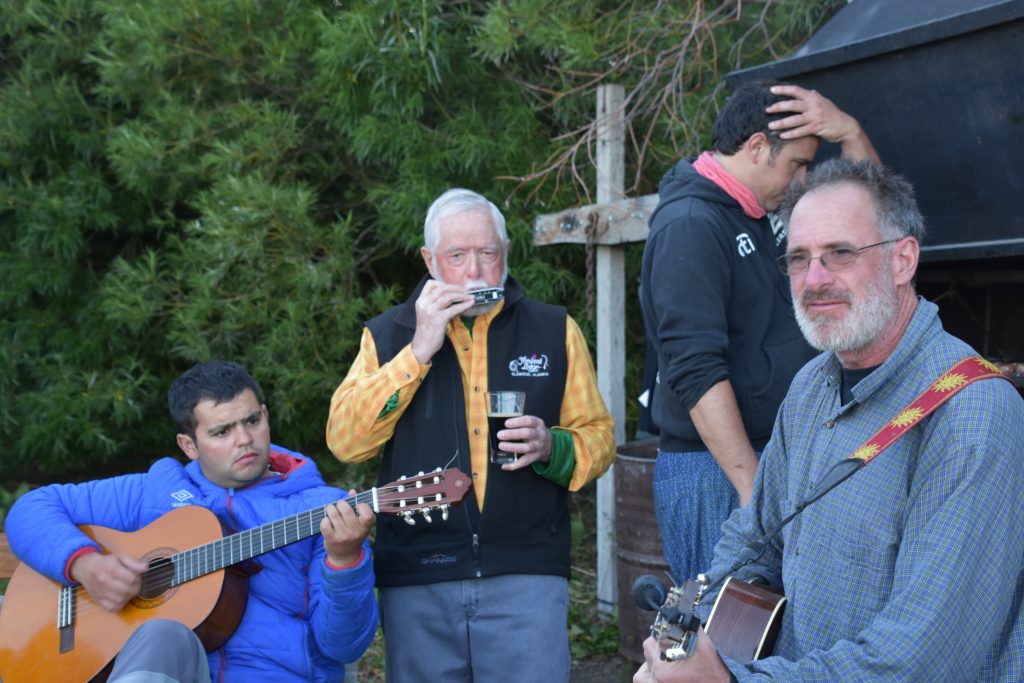 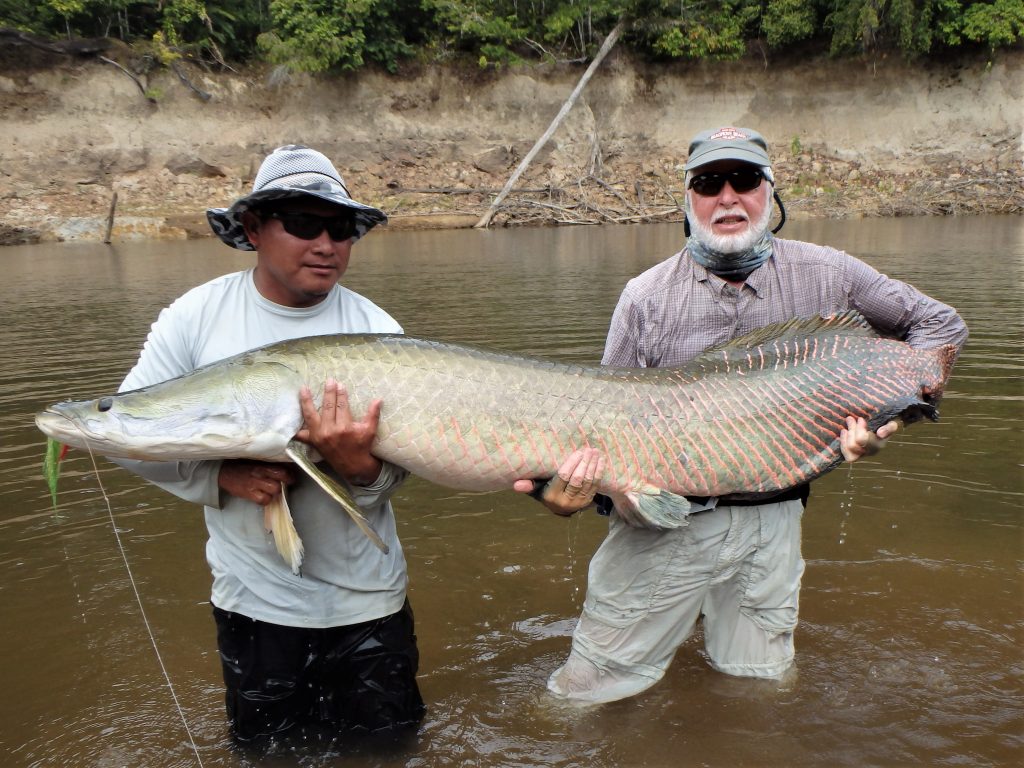 Sam booked a trip with us to the Amazon after the fly fishing show in 2014 where he obviously took a liking to Rob and the gang. He has now been to all but one of our destinations which we are going to cover soon. Sam is a part of what we sometimes refer to as the “A Team” which is a group of our friends that like to do these trips together. Sam is an accomplished harmonica player and on our trips, Sam will do things like, sneak off to the kitchen and play some background music while the staff is preparing dinner.  We get Sam, who plays a harmonica, Evan who is a guitar playing rockstar and Charlie, one of our guides who plays a mean 5 gallon bucket, put all them together and add in a camp full of singers and it makes for a really fun week.

So there are a few things left to talk about to complete our story of Sam Bishop. On Sam’s first trip with us to the jungle, Sam who is usually not in a hurry to get home decided to add on a week (or two) to Guyana to fish for Arapaima. The roadtrip to get from our camp to another camp in Guyana was the whole planes, automobiles, boats and canoe journey. Anyway when Sam got back to the states, we found out that the trip was quite amazing and what we talk about is that Sam slept under a tarp in the jungle for over a week with nothing to keep his beer cold. See, Sam is a real beer drinker and we still laugh about him drinking hot beer for a week aside from sleeping under a tarp. Well Sam finally caught a creature of a fish and has memories of a couple of Arapaima that would blow your mind. But after all that Sam still talks about his first trip with us and the afternoon that Rob and Evan stole all the beer out of his cooler in his fishing boat and this was really even before we knew the importance of the beer. When Sam and his guide finally caught back up to the pirate boat, they all had a good laugh but Evan was forced to take on Sam in a push-up contest on the beach in which the outcome was lopsided in Sam’s favor.

As you can see Sam has a special place in our family of travelers and is a very unique man. We look forward to the next chapter in the life of Sam and hopefully being a part of it.