The best Chef of the Amazon joins The Rubber Path

Santarém is a place where you’ll hear a lot of hard-to-believe stories. Here goes the son of an electrician and a dressmaker, descendant of a confederate family and a kitesurfer that is now the best chef of Northern Brazil. Meet Saulo Jennings, a river boy, passionate cook and a proud representative of the Amazon and especially of the Tapajos River.

When you look at Saulo’s family today it’s hard to believe they belong to the blood of confederados (confederates). A few hundred confederate families came to Brazil right after the Civil War in the United States. Some because they were promised to be able to keep their lifestyle (including the right to have slaves), many to have a new beginning. A lot of those families were quite conservative, did not mix with locals, tried to plant the same crops as back in Northern America and live the life they used to. The Jennings family was different. While many of the confederates didn’t manage to adopt, succeed or simply survive in the tropics, the Jennings simply accepted their new home. They invested in education for their kids, adapted to their new environment and fell in love with people around them. Like some other confederados, the Jennings significantly influenced technological advances in the Santarem area in the early 1900s. As they still do today. Saulo’s mother Selva, acting as a drill sergeant, hammered on her kids till she could be confident in their future. Today her kids are: Erik Jennings, proud citizen of Santarem and one of the best neurosurgeons in South America, defender of indigenous people and the environment. Fabio Jennings, internationally reputed rheumatologist.  Victor, the adopted son of the family and the first kitesurfing teacher in Santarem, was also pioneer in adventure holidays on the Tapajos river and a great asset to the work of Federal Police on the river, and Saulo, the #1 cook of Northern Brazil, owner of the best restaurant in the Amazon and a happy father of two kids – Luisa and Paulinho. 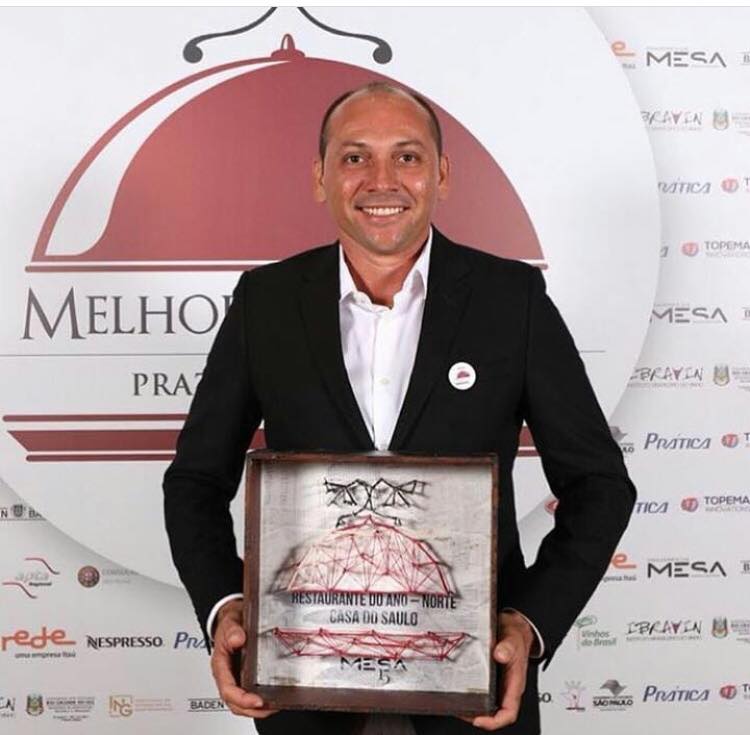 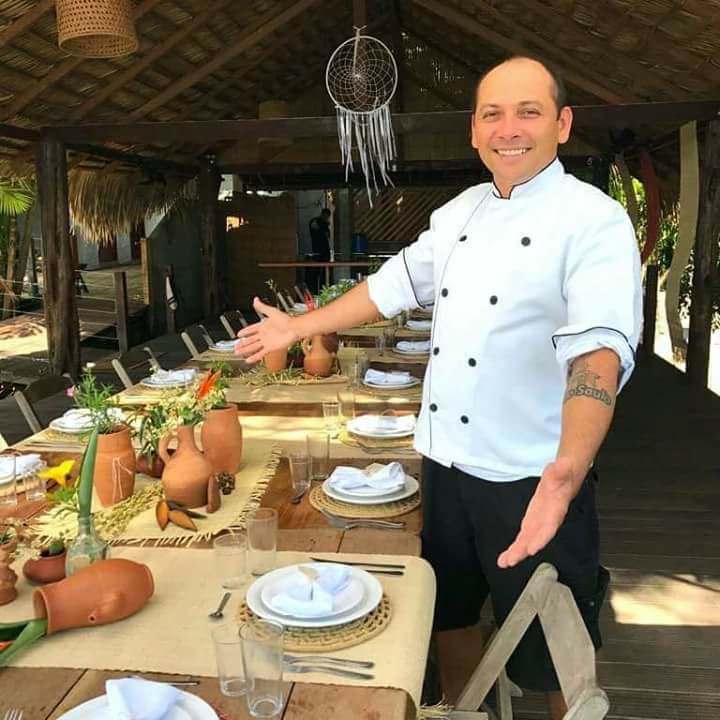 The story of Saulo, his house and his restaurant is an Amazonian equivalent of the American Dream. Having spent most of his youth working in human resources, management and sales, Saulo could never forget his main inspiration in life, his father. A hard working electrician that used to come home after work and still be in charge of making dinner. Their house was in front of the meeting of the Amazon and the Tapajos rivers, less than 10 miles from the Maicá floodplain, so, fish has never been a problem. Saulo’s father was an excellent cook, and even now, after having got to know most of the haute cuisine techniques, Saulo still considers him as the best cook he’s ever met. Cooking was a pleasure and what made him most happy was to see his friends delight in his original dishes. That passion marked the whole family and made Saulo become who he is today.

“Casa do Saulo”, a monumental wooden restaurant standing on the hill at Carapanari beach, receives up to 600 guests on a Sunday these days. It is the Bucket List restaurant for anyone who comes to Santarem and dozens of people go there every day at least to take photos. The amphitheater he built and gave it his mom’s name is turning into a mecca for all the cooks around Brazil who want to learn more about the ingredients and techniques of the Tapajós Cuisine. The “Vai, Tapajós!” festival that started with a deal between Saulo and Soul Kitchen, a group of chefs  from Sao Paulo, is now one of the top 10 New Years eve parties in Brazil, bringing at least 1200 people from across the country to explore Santarem, its cuizine, and its natural beauties.

Basically it all started with Saulo getting tired of the business world, buying a piece of land on the riverbank and turning into a kitesurfing instructor – a sport brought to Santarém by his brother, Erik. Business consulting was part of that life but little reasons existed back then to drag Saulo 10 miles to get to Santarem, leaving his piece of paradise. Kitesurfing lessons and business consulting sessions used to end with a meal – cooking was still quite a hobby for Saulo. That’s when this river boy actually figured there was a much bigger opportunity in his kitchen than in his office or on the white sand of Carapanari beach. So, against all odds of marketing and business management rules he studied and practiced, Saulo opened a restaurant in his house, 16 km away from the town on a very underdeveloped road on July 23rd, 2009.

The idea was simple, not to sell just food, but the experience of feeling like home. So, coming up with a name wasn’t a problem, “Casa do Saulo”. The grand opening saw 22 people of which most were friends and family, which, for a “remote” place in the middle of the jungle and lack of stable power supply seemed to be a success. Day 2, no one was showing up. Saulo felt like he had quickly come to the end of his friend list. Well, a car parked, and the family coming out of it said they were looking for a charming little restaurant someone had told them was serving lunch. Happiness and relief – two words that describe the feelings of a business owner when the light bulb goes off and he figures out that the best marketing tool in the history of humanity is word-of-mouth. While Saulo was cooking with his soul, he knew that to get to the next level he needed to study the techniques. Laurent Suaudeau school in Sao Paulo was one of the steps in that direction. Even that ended up being not just a learning process, but an exchange, people from Brazilian South and South-East don’t know much about the fantastic variety of ingredients coming from the state of Para, so Saulo introduced some of the Tapajos Cuisine. Making new culinary friends there resulted in so many visits from the Brazilian shore line to Saulo’s homeland and that enriched Brazilian Cuisine even more. 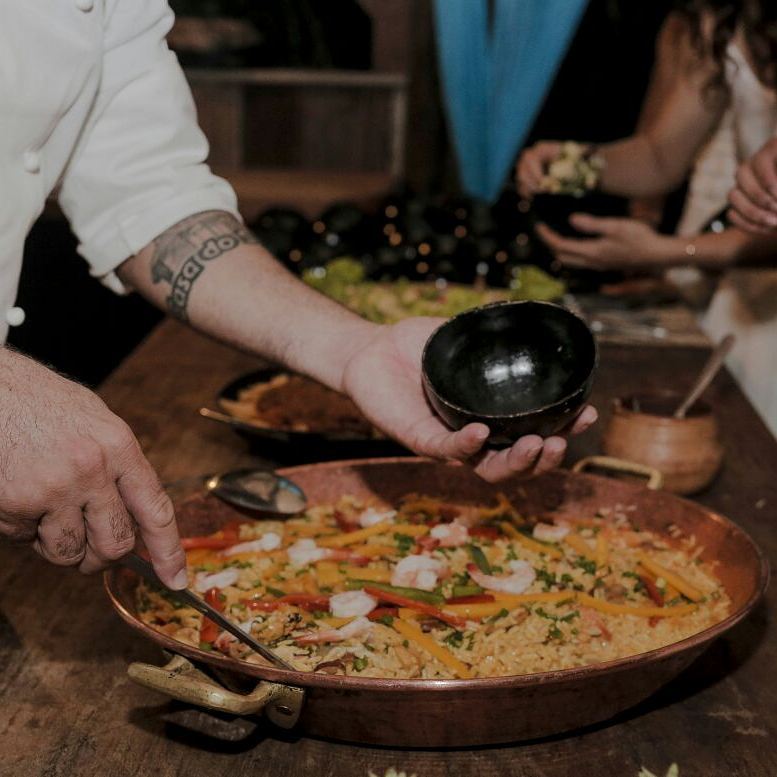 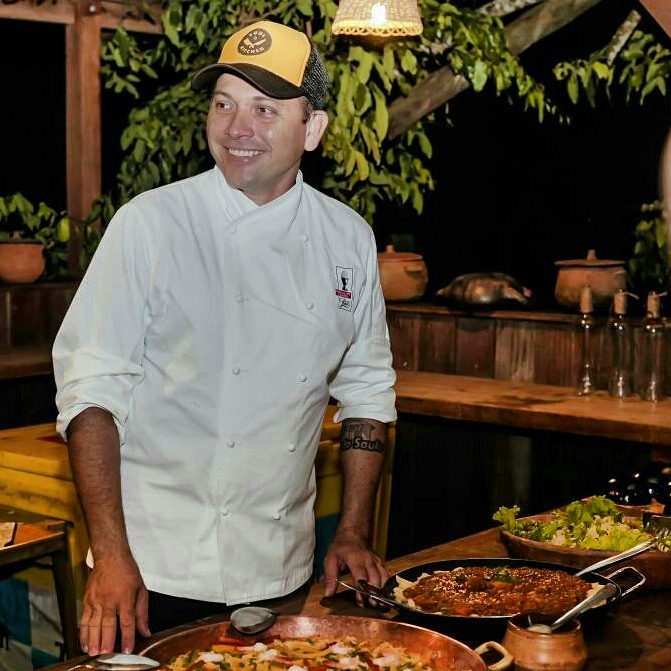 The list of rewards and achievements is long, both for the Restaurant and it’s “maître”. Saulo is still a river boy. He cares about the river, the environment and the riverine people. He monitors the management of the raw materials that turn into his signature dishes, like Arapaima with Bananas and shrimp with Brazil Nut milk. Whole villages revolve around people like Saulo. Saulo is among 4 area restaurant pioneers who started raising Arapaima with natural foods for many reasons, one of which is to not change the taste of the fish. Walking into Casa do Saulo you will see a kids playground made of leftover wood, organic planters, table sets with clay pottery from Curuai village, Cuia bowls from Arapixuna, a village across the river, placemats made of açaí branches in Maguary village. Ribeirinho is a Brazilian word that today is associated with people that live along the Amazon river and its tributaries and depend on its resources for survival. Saulo’s brother, Erik, says this word can totally be applied to his whole family, they’ve always been connected to the river. Saulo is among very few people in the state of Para who believe eco-tourism could be one of the main ways of sustainable development in the region. He has a boat called Fabico and organizes trips to explore vast beaches of the Arapiuns river and its charming villages including those of Tucuma palm leaf weavers. When Saulo got wind that his good friend Karim had designed a new Eco-tour on the Tapajos River, (The Rubber Path Cruise), Saolo saw a new opportunity.  We needed to choose a boat but Instead of just a boat, we got the whole package. Someone who was ready to help with all needed logistics including top notch local cuisine and a beautiful boat that was perfect for our needs. Saulo, already a great friend, is now a partner and is helping to ensure our first eco-adventure is a next level experience.